Amid reports of a rift between the two countries, Russia’s ambassador in Damascus has insisted that they remain close allies reports Al-Watan. 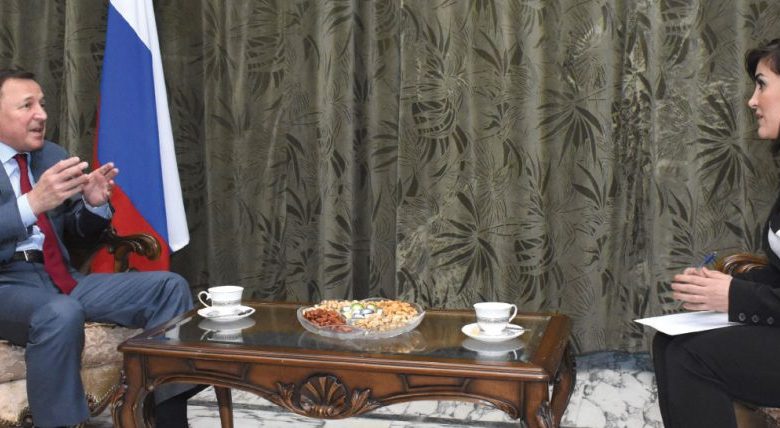 Russia’s Ambassador to Damascus, Aleksandr Yefimov, confirmed in an interview with Al-Watan that there is no basis to the rumors currently circulating about a dispute in relations between Russia and Syria, and that those lying and spreading fake news about cooperation between Moscow and Damascus are simply carrying out media sabotage. Those who benefit from the fake news about Russia and Syria are those two countries’ opponents, who need an opportunity to offend and distort all their positive achievements secured in recent years.

Efimov stressed that actors working against Syria and Russia, after failing to achieve their destructive goals through military force, are trying to exert political pressure on Damascus and choke it with unprecedented economic sanctions. They remain empty-handed, and are trying to use all means, including pathetic attempts at finding “faults” that do not exist in relations between Russia and Syria, in order to separate our two countries.

The Russian ambassador stressed that these attempts will fail, adding, “They will not be allowed to even approach the intended results. In other words, ‘the dog barks, and the caravan continues on its way.’ Russian-Syrian relations are stronger today than ever before, distinguished by their friendly and strategic nature and aimed at achieving joint goals to benefit both the Russian and Syrian people.”

Regarding continued violations of the Moscow agreement in Idleb, Yefimov indicated that militants there did not recognize the existing ceasefire agreement, and are doing all they can to break it. They are continuing to bomb and attack Syrian Arab Army locations and trying to hit Russian military facilities in Hemeimeem, as well as hinder joint Russian-Turkish patrols. These realities confirm that Idleb is not a so-called “last refuge for the moderate opposition.” It is a stronghold for terrorists and criminals whose presence cannot be tolerated forever. “We affirm that ceasefire agreements in Idleb do not eliminate the need to continue relentlessly fighting terrorism and restore sovereignty over Syrian territory to the legitimate Syrian authorities as quickly as possible,” Yefimov said.

The Russian ambassador added that his and other countries had called for an immediate and complete end to unilateral sanctions hindering Syria’s efforts to fight the coronavirus epidemic. “Unfortunately, these calls have not been met, and those sides known for supporting sanctions do not intend on abandoning that approach. On the contrary, they are prepared to intensify pressure on the countries they are not satisfied with.”

Yefimov stressed in his interview with Al-Watan that his country does not abandon its Syrian friends, and it communicates its support for legitimate Syrian authorities, and wishes to help them defend the rights of the Syrian people within the framework of international human rights law.