Riad Ismat, who was well-known across the Arab word for his plays, books and critics, has died in the US at the age of 73 of coronavirus reports Al-Watan. 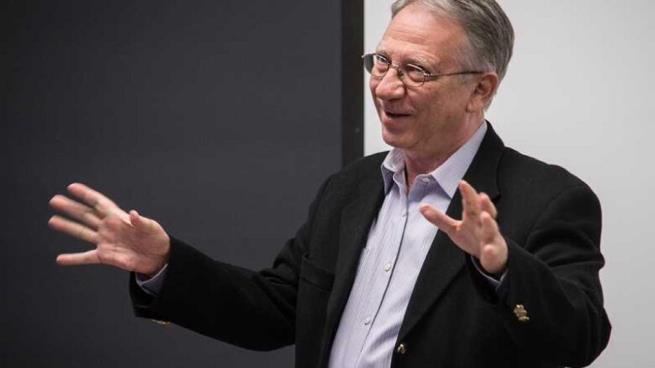 On Wednesday, the great writer, critic and playwright Riad Ismat, former minister of culture, died of coronavirus in Chicago. He was 73 years old.

Ismat was born in 1947 in Damascus, where he attended school and obtained a degree in English literature in 1968. His relationship with the theater began in 1967 while he was still a student, when he saw an English-language production of the Shakespeare play “Much Ado About Nothing” directed by the late Rafiq Sabban.

Afterwards, Ismat was active in the theater, publishing criticism and directing works for students of the Martyr Bassel al-Assad Institute, including “Antigone” by Sophocles. He also trained amateur actors for the Youth Organization and the Workers Union, presenting most of his theatrical texts in Syria and other Arab states including Lebanon, Iraq, Tunisia, Libya, Sudan and the occupied city of Jerusalem. Among those plays were “A Game of Love and Revolution,” “That Which Does Not Arrive” and “Abla and Antar.”

In 1982, Ismat received a diploma in theatrical directing from Cardiff University in Wales, then another doctorate in 1988 in the US. He wrote 33 books, including the plays “The Banana Republic” and “Searching for Zeinobia,” as well as the criticism books “The Devil of the Theater,” “The Tragic Hero on the World Stage” and “Sound and Echo: A Study of the Modern Syrian Story.” He also wrote screenplays and scripts for television series, including “Halaku” and “Crown of Thorns.”

Throughout his career, Ismat held a number of positions including Dean of the Higher Institute of Theatrical Arts, assistant to the Minister of Culture, General Director of Radio and Television, an ambassador and finally as Minister of Culture in 2010.

After his beginnings with theater in 1967, he began publishing theatrical criticism. In 1972, he directed a student production of Sophocles’ “Antigone” at the Martyr Bassel al-Assad Institute, then Shakespeare’s “Hamlet” in 1973.

He presented most of his plays in Syria and other Arab countries, including Lebanon, Iraq, Tunisia, Libya and Sudan, especially “A Game of Love and Revolution,” which was first directed by Hussein al-Idlabi for the Damascus National Theater in 1975 and later performed at the Carthage Festival in Tunisia.

Ismat published 33 books of plays, stories and criticism. His most famous plays are “A Game of Love and Revolution,” “Mourning Becomes Antigone,” “Sindbad,” “Nights of Shahryar,” “Abla and Antar,” “The Banana Republic” and “Matahari.”

His most famous books of criticism are: “Spotlight,” “The Devil of the Theater,” “The Tragic Hero on the World Stage,” “Sound and Echo: A Study of the Modern Syrian Story,” “Naguib Mahfouz: Beyond Realism,” “The Arab Theater: Dream or Knowledge” and “Memories of the Cinema.”