President Assad has dismissed Talal al-Barazi, and replaced him with Atef al-Nadaf, who was previously governor of Suweida writes Alsouria Net. 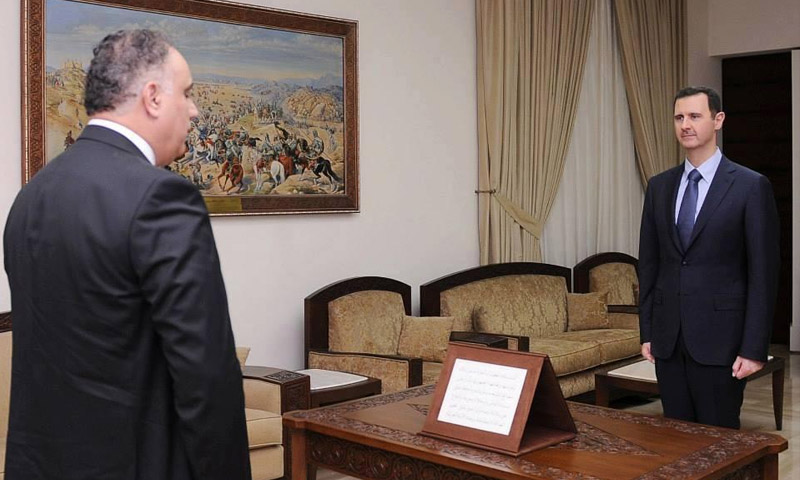 On Monday, the Syrian president issued Legislative Decree No. 22 for 2020, dismissing Atef al-Nadaf, Minister of Local Trade and Consumer Protection, and succeeding him with Talal al-Barazi.

Barazi previously served as governor of Homs, in accordance with Legislative Decree No. 256 for 2013, after working as Chairman of the Board of Directors for Damascus International for Artistic Production, in addition to being a member of the Damascus Chamber of Commerce and the Damascus Countryside Chamber of Industry in the film and television production sector.

A Syrian businessman, Talal al-Barazi is considered a management and public relations consultant for the Sharjah airport’s free zone. He founded the Talal al-Barazi International Foundation in 1997, which includes Damascus International for Artistic Production, and is a member of the Syrian Cinema and Television Industry Committee. He founded the Talal al-Barazi Foundation for Exhibitions and Conferences, and the al-Barazi Foundation for Contracting. He is a member of the Syrian Contractors Union—Quneitra. He is partner and director of Arab relations in the National Agency for Public Relations and Communications. He is a founding partner in a number of companies working in the education sector, medical services, tourism investment and real estate development. He also contributed to founding the al-Bawadi Contracting and Real Estate Development Company in 2012.

Barazi also has relations with the Lebanese Hezbollah. The group honored him in 2018 in Lebanon’s Hermel region for his role in “taking care of Lebanese people inside Syrian territory.”

Atef al-Nadaf, the former Minister of Local Trade and Consumer Protection, was appointed to that position in late 2018 by a legislative decree. Previously, he was Deputy of Administrative Affairs at Damascus University’s Faculty of Dentistry, as well as head of oral and maxillofacial surgery. He was governor of Idleb from 2005-2009, then governor of Tartous until 2012, when he became governor of Suweida as well as being elected to the People’s Council of Syria until 2016. He was then named Minister of Higher Education.