Teachers in northern Syria are trying to continue teaching, but a lack of resources means that some children are unable to get any education reports Zaman Al-Wasl. 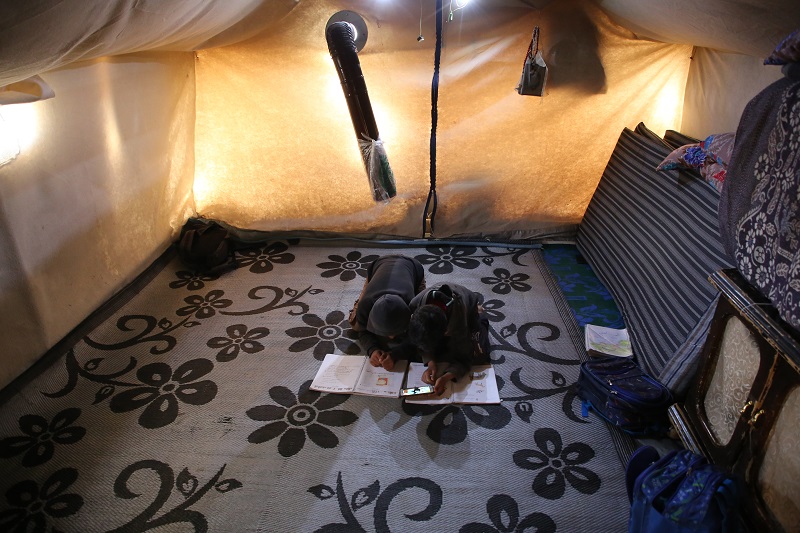 As the COVID-19 pandemic spread around the world, the Idleb Educational Complex has been closed and classes suspended in fear that the virus would reach the liberated areas in northern Syrian.

Despite the difficulties of the distance learning, teachers in the al-Zaitoun camp in the western countryside of Idleb have started giving lessons online.

Teacher Muhammad al-Ahmad said that due to coronavirus, Abjad Initiative for Education has taken preventive measures within the camps that they work, creating educational groups for children on social media forums.

“Our mission as the teaching staff is to give lessons that are recorded and checked for mistakes, and then broadcasted in spaces that can be accessed by the parents.

This method, however, faces a number of difficulties in the camps in which they operate, including weak internet and the lack of smart phones for some families.

“We have distributed pamphlets to families in the camps as precautionary and preventive measures. We are trying to continue providing children with the required development and education, to the best of our abilities,” Ahmad concluded.

Idleb province is home to 3.5 million people, one million of them have been displaced, according to the United Nations.

Meanwhile, the Health Minister in the opposition’s Interim Government said 14 suspected coronavirus cases in Idleb province tested negative on Wednesday; good news as the World Health organization warns of the limited capacity to deal with a rapid spread of the virus in northern Syria.

Dr. Maram Sheikh told Zaman al-Wasl that no coronavirus cases have been confirmed in the opposition areas until now.

“All 81 suspected cases were tested negative since the kits arrived at the ministry’s laboratory in the liberated northern Syrian,” he added.