Syrian steel workers are struggling to survive due to the harsh economic conditions that the war has created in the country reports Asharq Al-Awsat. 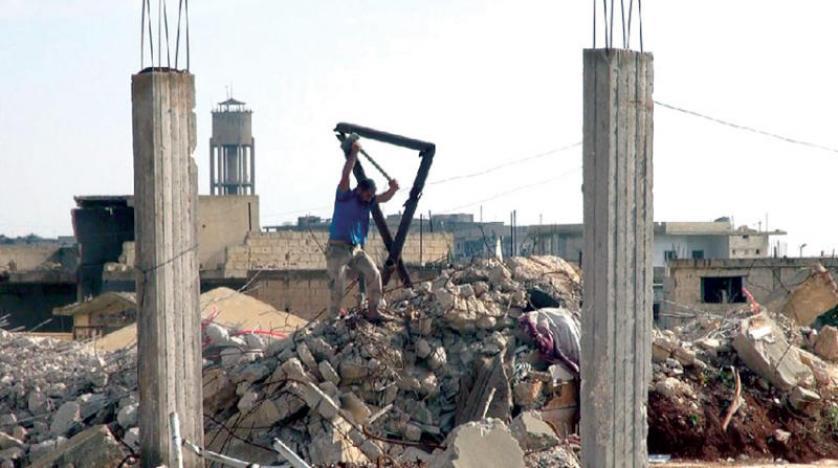 Extracting used steel, fixing it and selling in Syrian markets is one of the occupations that have recently become widespread in Syria. This is due to the extent of the destruction that Syrian cities and villages left behind by bombardment and airstrikes and the fact that a lot of steel was used to build these villages and cities’ buildings and homes, leaving much of it in the rubble. The destruction has also created a need for metal, and there is a strong demand, because of its relatively low cost, for used steel from Syrians whose income is limited and those who want to repair their homes or build new ones.

Abou Abdo, a man from rural Hama who owns a worksite for extracting used iron from the rubble of destroyed buildings says that “given the lack of job opportunities in opposition-controlled areas and the deterioration of our living conditions, extracting used iron from buildings that had been destroyed by bombing and airstrikes and then selling it allowed me to make money to meet the needs of my family 6 years ago.”

He adds: “In the beginning, I used to work round the clock extracting used steel from destroyed buildings. After the owner of the home’s roof gave up his rights to it in return for a fee, I would break the concrete blocks left behind by destroyed roofs and columns with a large hammer that weighs 10 kilograms, ammunition, and other hand tools. After extracting the iron, I would go to the main center, which was in the city of Khan Sheikhoun at the time, to sell the extracted amount, which was usually a ton or a little more. Then I would go to another destroyed building and agree on the terms with its owners, who received either a fee or a share of the iron.”

Selling used steel was not widespread before the eruption of the Syrian war. Syrians depended on steel that was of good quality, unused, and imported. It was available in abundance in Syrian markets and used to cost between 40 and 45 Syrian Pounds per ton at the time. Today, it cost 450 thousand pounds, an amount only a small minority of Syrians can afford. As for the used steel, its abundance means that it costs 200 thousand pounds per ton after repairs.

For those with limited means, working on extracting steel provides limited but desperately needed income. Mohammed Yassen, from Sarkab, managed to save the 250 thousand pounds of the 500 he needed to get married to his fiance by doing what described “exhausting work”. For the past year, he has been working throughout the day with linen gloves on as he put steel into a machine and taking it out from it 3,000 pounds a day. He says that he has promised himself to keep working until he manages to gather the full amount he needs.