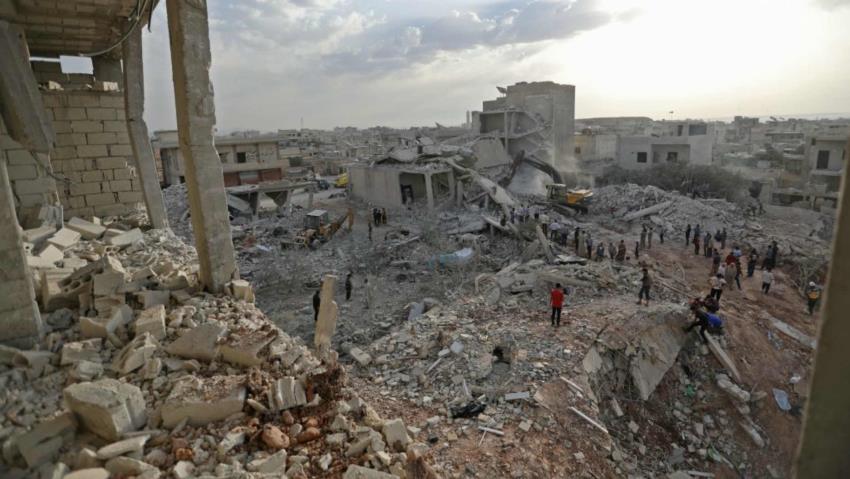 Schools and nurseries in Idlib province were targeted in air strikes in northwest Syria on Tuesday, in a wave of bombing by regime and Russian forces that left at least 21 people dead.

Six schools and two nurseries were hit in a wave of airstrikes in and around Idlib city on Tuesday, as the regime intensified its offensive on the opposition province, backed by Russian warplanes.

Three teachers and a pupil were killed – and six children seriously injured – when a cluster bomb exploded in a playground, just as classrooms were being emptied due to heavy air raids in the area, according to The Guardian.

“We have been working under a state of emergency for two weeks due to the escalation in regime and Russian attacks on Idlib city… Two of our teachers are now in a critical condition. Parents rushed to the school horrified and looking for their children, who were still in shock,” a teacher told the British daily.

Three medical facilities and a number of refugee camps were also targeted in bombing, according to the Syrian Response Coordination Group.

It said that the “silence by the international community” regarding the Syrian regime offensive was an “open invitation” for the deadly assault to continue.

Three more people were killed in Idlib province on Wednesday, as the regime bombardment continued.

Regime forces captured Kafranbel on Tuesday, a town at the heart of revolutionary movement in northwest Syria with activists creating satirical, humorous and stinging placards about the war and global apathy.

Other villages in Idlib province were also captured, as the regime continue their advance in the opposition province.

But rebel forces, backed by Turkey, have made advances around Saraqeb, an important Idlib town given the location on the M4 and M5 highways.

The regime intensified their assault on Idlib province in December, with around a million people displaced in a wave of bombing by the Russian-backed force.

The humanitarian situation in northern Idlib is grim, where hundreds of thousands of children and their mothers have been forced to sleep in open fields or on the streets in sub-zero conditions.

With families unable to find even a tent or temporary shelter due to overcrowding at camps in northern Idlib, children have frozen to death.