Families have learnt that their children who signed settlements with the regime, and were sent to fight on the frontlines, were killed in action reports Sowt al-Asima. 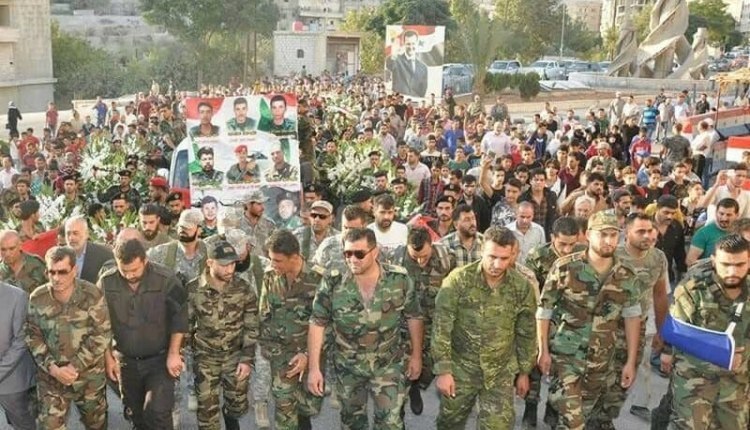 On Saturday, residents of the city of al-Tell in the western Damascus countryside mourned the death of Ali Khalid al-Ali, a member of the city’s settlements and who was a volunteer in the Fourth Division ranks. His body has not yet been delivered to his family, according to Sowt al-Asima’s correspondent.

The correspondent added that two days ago, the city’s residents mourned Adi Abdel Nasser Salih from the city, who was a volunteer in the Fifth Corps, killed on the western Aleppo countryside fronts.

Sowt al-Asima’s correspondent reported that Salih’s family lost contact with his brother, Amer Salih, who is a volunteer in the Fifth Corps, while his group’s command confirmed he disappeared during the ongoing fighting.

Residents of the towns south of Damascus over the last week mourned five of their children who had been subject to settlements and had joined militia ranks. They included a resident of the town of Yalda, two from Babbila, and two from Beit Sahem, all of them killed in the western Aleppo countryside.

A local source told Sowt al-Asima that more than 100 families from the towns south of Damascus had lost contact with their children who had been sent to the fronts in northern Syria after they had been in touch with them daily. The source said that the commands of their groups refused to clarify why they could no longer make contact.

The Sowt al-Asima team has documented the deaths of more than 200 settlement fighters volunteering in Syrian regime militia ranks from the eastern and western Damascus countryside on the fronts in northern Syria since the start of 2019.