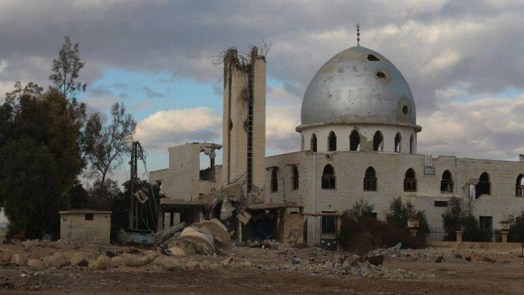 On Wednesday, Military Security branch patrols on carried out raids against a number of houses, shops and farms in the towns of Nashabiyeh and Otaba, and arrested 13 young men from the two towns.

The correspondent added that the Military Security set up a temporary checkpoint in the Grand Mosque area in Nashabiyeh, coinciding with the launch of the campaign inside the town, and that the checkpoint arrested three young men going back to their homes.

According to the correspondent, the military checkpoints deployed around the al-Marj area in eastern Ghouta had imposed restrictions on the area through which they carried out security operations for all passersby, including women.

Regime intelligence forces since the start of the year have carried out dozens of campaigns in various cities and towns in the Damascus countryside with the aim of arresting people wanted by the security branches and those who have evaded military service.

Patrols by the State Security branch, which is directly responsible for security in Douma in eastern Ghouta, carried out a campaign which led to the arrest of more than 25 people from the city after setting up more than 10 checkpoints in various districts, including three on the main al-Jalaa street, and two on both the al-Quwtli and Khorsheed streets, as well as a checkpoint on the Old Aleppo street and another on the way to the cemetery.

The al-Madaris checkpoint, shared between the Fourth Division and the Military Security, stationed at the outskirts of Masarba town in eastern Ghouta, on Feb. 16, 2020, arrested seven men from the town with the aim of forcibly conscripting them into the regime army, at the same time as security inspections, imposed by the checkpoints around the town, were performed on most passersby.

The Military Security branch at the start of the month issued lists, which included the names of more than 150 men from the town of Kafr Batna in eastern Ghouta, to the checkpoints deployed in the town and at its outskirts, amid a security tightening.

The State Security branch at the start of the year launched a campaign of raids during which it arrested more than 25 men from eastern Ghouta in the area between the city of Douma and the town of Masarba, coinciding with a security crackdown imposed by checkpoints in the city, while the Harasta Military Hospital checkpoint, which is the main entry and exit point for Douma, arrested about 15 young men from the city while they were entering the city through the checkpoint.

Sowt al-Asima’s team documented more than 1,200 arrests over 2019, including a number of settlement fighters and those wanted for military service, as well as a number of those wanted on various criminal charges, and women arrested after various phone calls with their families living in opposition areas in northern Syria.