The 27th General Conference of the General Federation of Trade Unions has hailed the efforts of the Syrian laborers, in the face of great struggles writes SANA. 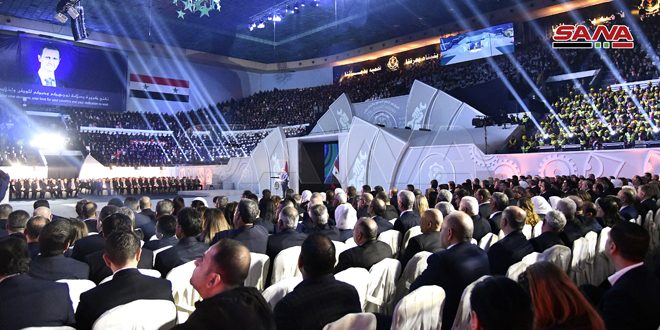 On Thursday, under the patronage of President Bashar al-Assad, the 27th General Conference of the General Federation of Trade Unions (GFTU) started activities at the al-Faihaa Sport Hall in Damascus with the participation of Arab and foreign delegations.

The GFTU Chairman, Jamal al-Qadiri, in a speech at the opening of the conference, said that the Syrian laborers have built the homeland with their hands over long decades, and they have been loyal to it and to the national interest any they have been struggling to defend the homeland since the beginning of the crisis, nine years ago.

Qadiri added that the Syrian laborers have realized that this continued terrorist war targets the Syrian people and the national and pan-Arab stances of Syria and its resistant stance in the face of the Zionist-Western schemes hatched against the region and the interests of its peoples.

He noted that the Syrian laborers, despite of all the difficult circumstances, have been targeted, along with their institutions, by terrorists, but have continued to produce the basic needs of the Syrian people, so that they might to be able to remain steadfast in light of the unjust economic siege and the unilateral coercive economic measures.

Qadiri said that the resilience and nationalism of the Syrian laborers have been a main fortress for the steadfastness in the face of the terrorist war waged against Syria, as they have been like a service and productive army that stands by the side of the Syrian Arab Army, which has been, and is still, facing terrorism and its backers, and will until permanent victory is achieved.

The conference, which will last till Feb. 16, 2020, will be attended by about 479 representatives of trade unions in the Syrian provinces.