As the regime shows no intention of backing down and Turkey sending more fighters and hardware, Idleb is preparing for clashes between the two sides writes Brocar Press. 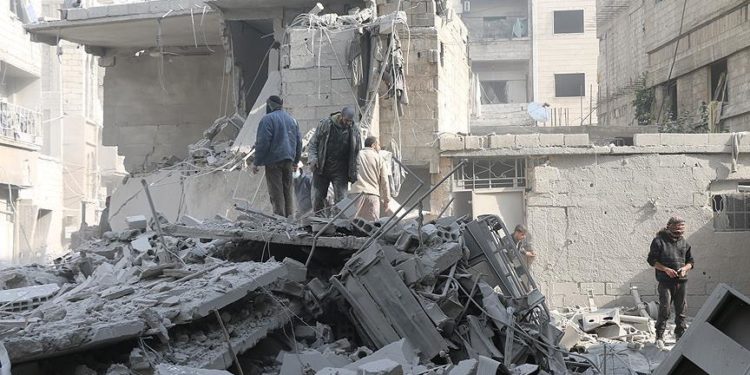 Events have accelerated over the past few days in Idleb in northern Syria, which has witnessed a heavy military campaign by the Syrian regime and its Russian ally, with the province now awaiting the results of discussions between the two guarantors (Russia and Turkey), to learn its fate. But indications are that a confrontation is nearing between the regime and Turkey, which it has threatened, in the event that the regime does not withdraw its forces to the border of the Sochi agreement.

On Sunday, Turkish Defense Minister Hulusi Akar said that his country could put in place two plans, known as Plan B and Plan C, in Idleb, hinting that a new Turkish military operation on Syrian territory could occur on the model of the three previous operations.

In press statements, he said that the implementation of the two plans depended on the regime’s adherence to the deadline given by Turkish President Recep Tayyip Erdogan to withdraw from the Turkish observation points, adding that if the regime does not abide by the deadline, set for the end of the month, “we will impose Plan B and Plan C.”

Akar did not give details about Plans B and C apart from hinting that they would resemble the Turkish military operations in northeastern Syria against the Islamic State in 2016 and the Syrian Democratic Forces in 2018 and 2019.

Turkish statements came a day after talks between Russia and Turkey in Ankara to discuss the latest developments in Idleb.

No results have been issued from this meeting, with the Turkish Foreign Ministry only saying in a statement: “Ankara hosted talks which lasted three hours. The delegation included representatives for the Foreign Ministry, the army, and intelligence agencies of both countries, in addition to the special representative for the Russian president to Syria, Alexander Lavrentiev. The situation in Idleb province was discussed, as well as steps which aim to move forward the political process in Syria, and in the end it was decided that negotiations would continue next week.”

Turkey has escalated its rhetoric around what is happening in Idleb and has threatened a confrontation with the regime after 13 soldiers were killed and wounded when regime forces bombarded an observation point near the city of Saraqeb.

Military reinforcements continue and Ankara calls on factions to be ready

Over the last few days Turkey has been sending reinforcements to its observations points in Aleppo, Hama and Idleb, and has set up a number of military points in these areas.

The reinforcements included tanks, armored vehicles and troop transporters, as well as rocket launchers and other military hardware, and a large number of soldiers, although Turkey has not officially announced the number of troops and equipment in Idleb.

In this respect, sources told Brocar Press that Turkey had called on rebel groups in Idleb to be ready.

Brocar tried to contact rebel group military leaders but some of them refused to comment on the matter entirely and other said it was difficult to give any information at the current time.