Norway's Finance Minister Siv Jensen has announced that she will resign over the government's decision to repatriate a women suspected of having links to ISIS writes Asharq Al-Awsat. 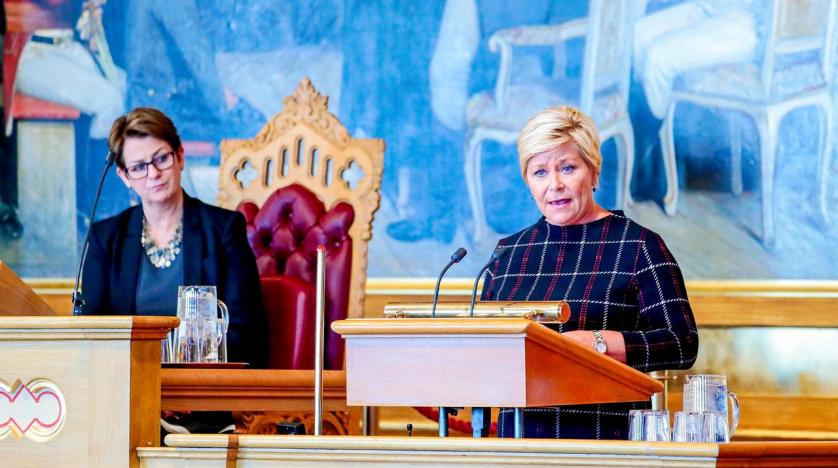 Norway’s Finance Minister Siv Jensen and her right-wing Progress Party will resign from the government over a decision to bring home from Syria a woman suspected of ISIS affiliation, Jensen said on Monday.

The anti-immigration party, Norway’s third-largest, is one of Prime Minister Erna Solberg’s four coalition members, together with her Conservatives, the centrist Liberal Party and the Christian Democrats.

The resignation robs Solberg of her parliamentary majority and could make the country more difficult to govern, but Solberg is still expected to remain in office as head of the minority coalition.

“I brought us into government, and I’m now bringing the party out,” Jensen told a news conference.

Jensen’s departure was triggered by a cabinet decision, announced last week, that the woman and her two children would receive help to return to Norway so that one of the children could receive medical treatment.

“Many believe she used her child as a shield to come back to Norway. There are many in Norway who are displeased by this, not just in the Progress Party,” said Jensen.

The woman, who left Norway in 2013, was formally arrested Saturday upon her return and was placed in an Oslo hospital with her two children. She is held on suspicion of being a member of ISIS.

“A majority in the government believed that the concern for the child was paramount,” said Solberg.

While Progress had offered to help the children, the populist party sought to deny any government assistance for adults seeking to return home after joining extremist groups abroad or marrying foreign fighters.

The party felt it was not consulted when the decision was made to bring back the woman and her children to Norway.

The mother, who was not named, refused to let the sick child travel alone to Norway, which then allowed her to travel from the Kurdish-controlled camp at Al-Hol where they had been detained since March 2019.