Residents of Suweida have taken to the streets again, blocking roads and calling for the regime to act to improve living conditions in the southern province reports Enab Baladi. 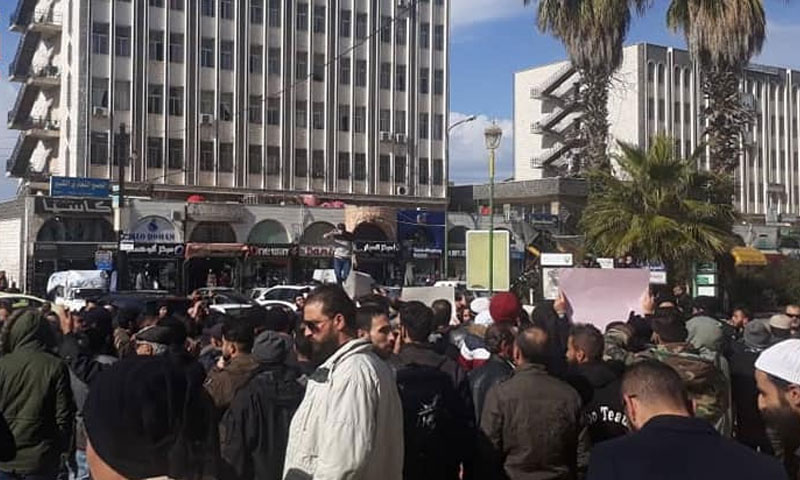 Suweida province in southern Syria has witnessed a second day of protests criticizing the economic situation and difficult living conditions in Syria.

On Thursday, the Suweida 24 page on Facebook published a video of the protest, which showed dozens of citizens chanting against the Syrian regime government.

The page said that the protesters had reached al-Seer square in the city center, where the Suweida province building is located, before departing.

The page said that the protests had moved to the city of Shahba in northern Suweida with the same demands.

Activists on social media published video clips of protesters in a crowded market.

The protesters also attacked Syrian media, according to video recordings seen by Enab Baladi, describing it as “fake news,” amid a Syrian security presence at the governorate building.

The protests are an extension of the protests that erupted yesterday, with the Syrian official SANA agency reporting that people gathered in al-Seer square to protest the living conditions and chanting, “We want to live.”

According to the Suweida 24 page, “peaceful protesters” blocked roads leading to the main square in Shahba and protested the “neglect by the Syrian government of its citizens.”

The Syrian pound saw new losses against the US dollar, reaching a buying price of 1,165 pounds and a selling price of 1,190 pounds to the dollar, according to the Syrian Pound Today, while the price of foodstuffs has risen significantly in more Syrian areas.