Displaced families from Idleb have travelled to Raqqa province to seek shelter, although it has not been disclosed how they travelled there reports Enab Baladi. 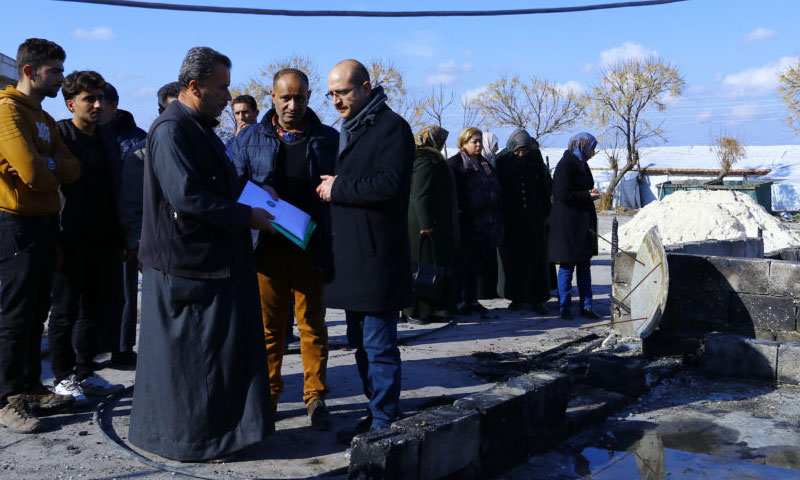 Officials in the Syrian Democratic Forces (SDF) reported that a number of displaced people from Idleb have reached Raqqa province, and have been received in a camp designated for them.

The head of the Idleb branch of the SDF’s Future Syria Party, Turki Da’dooa’, said that a few days ago, about 25 families from Idleb province had arrived in the Raqqa countryside and that the families had been received in the eastern Abu Qabeea area camp.

Turki told Enab Baladi that coordination to prepare for other families from Idleb was ongoing.

The Future Syria Party was established in 2018 and identifies itself as an, “independent mass political party that takes open peaceful struggle as a means of achieving its aims to create democratic change.” The party also stresses the unity of Syrian territory and good relations with neighboring countries, and, “bringing together community tradition and democratic modernity, and ensuring gender equality,” according to its official website.

Abu Omar al-Idlebi, a member of the Northern Democratic Brigade of the SDF was reserved about the specific way the families traveled from Idleb to Raqqa.

He told Enab Baladi that this initiative was based on a call, put out by the SDF leader Mazloum Abadi, to receive Idleb’s displaced who want to come to the Kurdish Self-Administration areas.

Abadi said on Twitter on Dec. 27, 2019: “Our doors are open to our people in Idleb, who can coordinate with [Idleb military forces] who are under the banner of the Syrian Democratic Forces to reach our area.”

Abadi did not blame the Syrian regime or Russian forces directly for the escalation in the area, but the Turkish side.

The eastern and southern countrysides of Idleb have been subjected to a major escalation by the Syrian regime and Russia since Dec. 19, 2019, with a land military campaign that has resulted in dozens of villages and points being captured, alongside an air escalation by warplanes on Maarat al-Nu’man city and its environs.

Since Sunday, a “truce” has begun to be implemented to stop the ground and air attacks in the de-escalation area in Idleb province after an agreement reached by Russia and Turkey, according to a Turkish Defense Ministry statement.

A source in Raqqa province (who asked not to be named) told Enab Baladi that displaced people from Idleb who reached the Abu Qabeea area in the Raqqa countryside came individually.

The source said that anyone could enter SDF-controlled areas, but on the condition that they get a sponsor, either from the Northern Democratic Brigade or from a Kurd in the area.

Enab Baladi’s correspondent in the Aleppo countryside said that the SDF had restored the Aoun al-Dadat crossing on Dec. 12, 2019, after a period of closure.

He said that the crossing was now operating with a civilian movement, while it had previously been used to bring in fuel from SDF areas to opposition areas.