After protests, the regime has released a number of defectors, who were previously promised that they would not be subject to arrest after reconciliation reports Smart News. 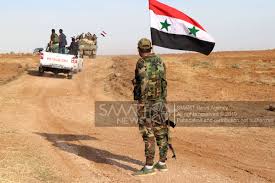 On Thursday, Syrian regime forces released 15 defectors they had arrested after taking control of Quneitra province in southern Syria.

Activists and local sources told Smart that the release of the prisoners came after their families threatened to expel regime forces from the police station in the town of Jubata al-Khashab and Brigade 90 if the regime did not release them.

The sources said that regime forces had held defectors in the Sa’sa’ prison near Damascus despite them carrying out “settlements.” They said that the defectors had handed themselves over to the regime after the negotiating committee guaranteed they would not be subject to arrest, without giving further detail.

On Tuesday, a number of residents from the village of Jubata al-Khashab (11 kilometers north of Quneitra) protested, demanding the release of prisoners and defectors held by regime forces before taking control over the province.

Hundreds of thousands of prisoners have been subjected to physical and psychological abuse in regime prisons and their security branches, and thousands have been killed. Activists accuse the international community of inaction in terms of putting pressure on the regime to reveal the fates of the hundreds of thousands of prisoners and forcibly disappeared persons in their prisons, securing their release and holding them to account for crimes against humanity.

The regime has recently released a number of prisoners, but has arrested other civilians and former fighters in the Free Syrian Army from areas under their control on almost a daily basis, despite the fighters carrying out “settlements“ with them.