In an interview with Rossiya 24, Assad said that Turkey will not repatriate Syrian refugees and that talks are underway to return the Kurdish people to the fold writes SANA. 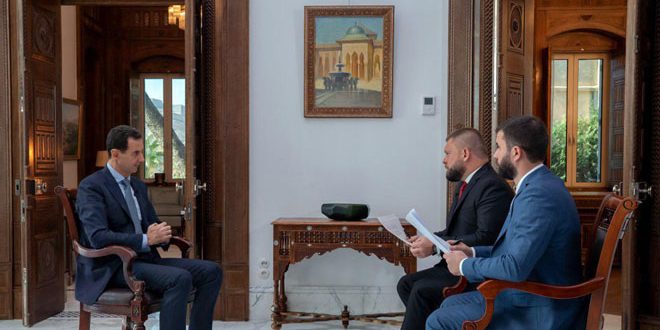 He also claimed that James Le Mesurier, the British co-founder the White Helmets, was also murdered. He implied that the American CIA killed Le Mesurier, using Epstein’s death as an example of another high-profile false suicide.

“And now the main founder of the White Helmets has been killed. He was an officer who had worked his whole life with NATO in Afghanistan, Kosovo, Iraq, and Lebanon,” he continued.

Assad said that Turkey will not repatriate 3 million Syrian refugees to the northeast of the country and this is a deceptive humanitarian slogan raised by the Turkish regime to create an ethnic conflict in this area and to bring the terrorists and their families into this region in order to create a new extremist community in line with the vision sought by Erdogan.

In the interview, Assad clarified that most of the Kurds are patriots who support their state and the Syrian people, but there are groups, some of these groups are Kurds, some are Arabs, working under American command and there is currently a dialogue with them, since the return of the Syrian Army to north, convinced them that stability is achieved when all of us are committed to the Syrian constitution.