The opening of the Albu Kamal crossing was supposed to create new trading and economic possibilities, but that dream does not seem to have come to pass writes Al-Modon. 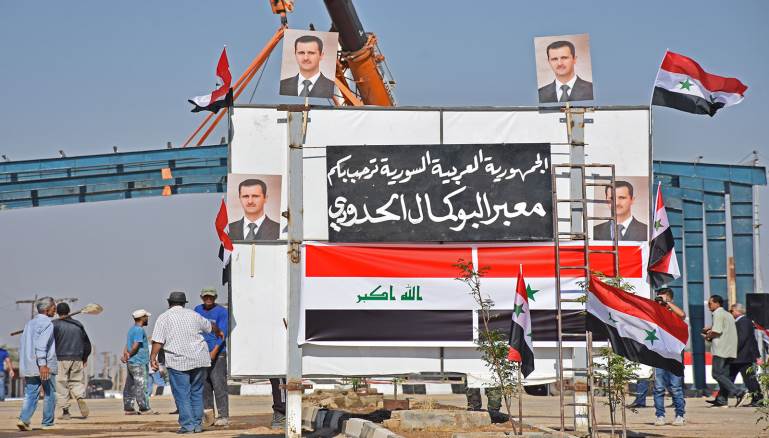 Despite opening officially more than a month ago, the Albu Kamal/Qaim border, which links western Iraq and eastern Syria, has not seen notable traffic. It appears that it was opened for political and military purposes related to Iranian transport and the conflict in Syria, according to Al-Modon’s correspondent, Abdel Kareem al-Rajaa.

Hezbollah Secretary-General Hassan Nasrallah said in a recent speech that, “the Americans know well that reopening the Albu Kamal crossing will revive Syria and Lebanon’s economy,” insisting on its economic importance for marketing Lebanese, Syrian and Iraqi products in a sort of economic integration in the countries of the “axis of resistance.”

Al-Modon’s sources said that just 10 trucks had crossed in the month since the crossing opened, coming from the Iraqi side. The sources could not confirm what these trucks carried, or whether they were totally commercial or military equipment.

Despite canceling what had been known as entry permits that had been imposed on Syrian vehicles entering Iraq before 2011, this has not encouraged Syrian traders to export their goods through this crossing.

Officials in the Iraqi Anbar province said that the crossing has not seen any commercial activity. Al-Modon’s sources said that it was taken as a land crossing to transport Iranian militias, most prominently the Nujabaa Movement, Sayid al-Shuhada, Kataib Hezbollah, and the Ansar Allah al-Awfia Movement. The sanctions imposed on Iran have forced them to move their members by land to reduce costs, after they had been relying on air transport to the Damascus airport. The crossing is also seeing the transport of Iranian pilgrims, who are visiting religious sites in Syria.

A source in Syrian customs said that the crossing was recently staffed with 148 people, most of them guards and station heads, who were transported as part of an exceptional transport schedule to support customs work, in anticipation of improved traffic and transport of goods.

Al-Modon’s sources said that the al-Tafoof Brigade of the Shrine of Imam Hussein in Karbala had taken control over the Syrian side of the crossing. The shrine in Karbala is a “foundation” concerned with pilgrimage to sacred shrines, which spreads Shia doctrine in Syria and Iraq.

The Albu Kamal/Qaim crossing represented a major commercial artery between Syria and Iraq before 2011, with economic agreements between the two sides and facilities and benefits given to facilitate the flow of goods and commodities.

The Albu Kamal/Qaim crossing fell under the control of the Islamic State between 2014 and 2017 before Iraqi forces in cooperation with the International Coalition were able to liberate it on the Iraqi side, while militias affiliated with the Iranian Revolutionary Guard took control over the Syrian side.