The first session of the small group of the constitutional committee has finished, with participants agreeing to principles and working mechanism reports Snack Syria. 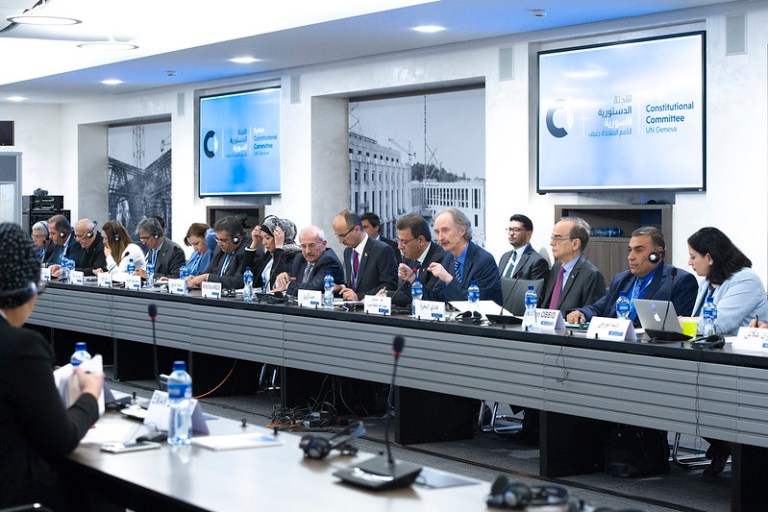 On Tuesday, the small Syrian constitutional committee closed its first day of meetings at the United Nations building in Geneva.

Sources said that the first session of meetings of the committee, composed of 45 members, representing three lists (government, opposition, civil society) would continue until Friday, with the meetings to resume at a later date before the end of the month.

The sources said that the meetings started at 1 p.m. in the presence of the UN Special Envoy to Syria, Geir Pedersen, and the joint presidents of the committee, Ahmed al-Kuzbari and Hadi al-Bahra. The meetings on Tuesday were limited to one working session, to resume on Wednesday at 12 p.m. Two sessions would be held, with a break, and without media.

Sources told Snack Syria that the small committee discussions were not easy, particularly given that they were the first. However they denied reports that the meetings were suspended or that there had been deep divisions, as reported in some media. They said that there were viewpoints put forward and proposals, which were not necessarily divisions, to be discussed and agreed upon. The sources hoped not to dramatize the news.

The attendees adopted the current meetings agenda for the small committee, agreeing to discuss the proposals put forward in the broad committee meetings, and to specify the proposals that could be approved as constitutional principles placed on the discussion table.

The joint head of the constitutional committee, Hadi al-Bahra, told journalists after the meeting that the working mechanism had been developed, which serves as the basis for the committee to be productive and to achieve the aims of its formation. Bahra described the meetings as “good”, saying that they had allocated that working mechanism and agenda, and agreed upon them jointly and consensually.

The members of the expanded constitutional committee agreed to the names of the participants in the small committee from each list, and reached agreement of the rules of procedure and code of conduct to govern the committee’s work. A source said that the small council would adopt a paper with 12 living principles previously agreed upon by all parties at the start of the work. The small committee’s mission was specified as constitutional drafting, to be discussed and agreed upon by members of the expanded committee, with the committee’s outcomes presented to Syrian citizens to be voted upon.