Protests in Idleb, Russia speaks out about the Russia-Turkey relationship, 183 arbitrarily arrested in October, rebels take he Kabana hilltops and a car bomb hits Tel Abyad. Catch up on everything that happened over the weekend. 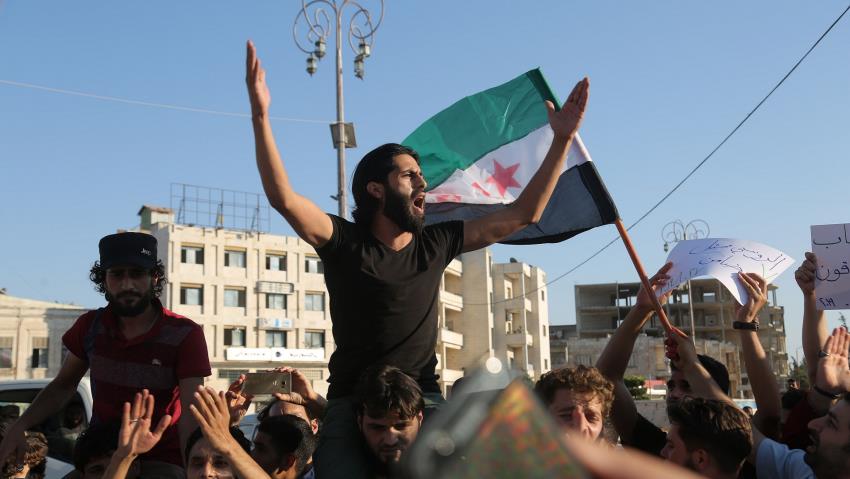 1. On Saturday evening, hundreds of people took to the streets of the city of Idleb in northwestern Syria to protest against the self-proclaimed National Salvation Government, which is affiliated to the hardline Islamist group Hay’at Tahrir al-Sham. The protests, according to Al-Araby al-Jadeed, took place after Russian airstrikes killed at least six people in southern Idleb province earlier on Saturday. The protesters condemned what they called the repressive measures that the National Salvation Government had imposed on Idleb province, which is home to 3 million people, nearly half of whom have been displaced from other parts of Syria.

2. A senior advisor for the Russian Foreign Ministry, Maria Khodynskaya-Golenishcheva, told Anadolu Agency that Russia learned the hard way, after failing to enforce reconciliation in Syria while working with the US and other international players for over three years, that the road to peace travels through Turkey. “We could not demilitarize the city as had been agreed,” she said, “We first thought, it was a lack of will on behalf of the US. Finally, we realized after discussing among ourselves, that it was something else. What was missing was that the regional states were not on board. This is when the Russia-Turkey love affair emerged.”

4. On Saturday, six army officers were buried in coastal Lattakia province following a surprise advance by rebels in Mount Turkmen, Zaman al-Wasl reported. Among the slain forces was Colonel Wael Mahmoud Fadhel, famed for his brutality and committing war crimes against the armed opposition in Lattakia. On Friday, rebels took four hilltops from the regime army and allied Shiite militias in the coastal province.

5. The attack near the Kabana hilltops in Mount Turkman came after a week of scattered clashes as the regime mobilized troops in the southern countryside of Idleb, seeking to take the last rebel stronghold near coastal Lattakia province.

6. An airstrike on Saturday by key Damascus ally Russia killed six civilians including a child in the embattled opposition bastion of Idleb in northwestern Syria, a war monitor. The strike hit the village of Jabala in the south of the Idleb region, taking the lives of six members of the same family, the Syrian Observatory for Human Rights said.

7. SANA reported that a number of civilians were killed and others were injured when a car bomb exploded in Tel Abyad in the northern countryside of Raqqa, where the Turkish occupation forces and the terrorist groups supported by the occupation are positioned. Local sources said that the explosion took place in the main market of Tel Abyad, claiming the lives of a number of civilians, and injuring others, in addition to causing material damage to houses and properties.

8. The People’s Assembly affirmed that what the US’ support and funding of terrorism is a desperate attempt to change the firm stances of Syria towards the Palestinian cause, and that the terrorist war waged against the country is an extension of the ill-fated Balfour Declaration, SANA reported. On the 102nd anniversary of the ill-fated Balfour Declaration, the People’s Assembly affirmed in a statement that the Balfour Declaration constitutes a black day in the history of the Palestinian people, the Arab nation and the history of humanity as a whole and a strong blow to international justice and legitimacy.