President Bashar al-Assad has lashed out at the Turkish aggression and has called for a strengthening of relations between Syria and Iraq writes SANA. 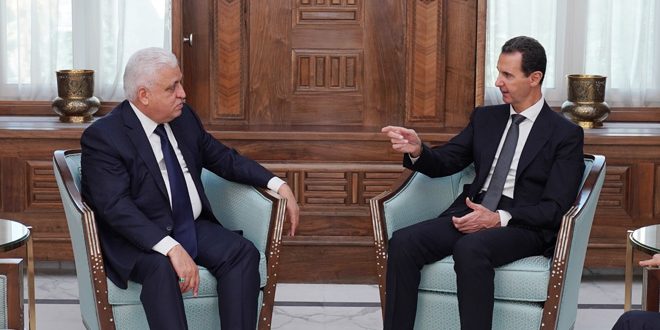 The message concentrated on means of developing relations between the two countries, and promoting the standing cooperation between them to higher levels and broader fields, whether in issues of combating terrorism, or border security in light of recent developments, in addition to economic cooperation and the opening of border crossings between Syria and Iraq.

Talks during the meeting dealt with the regional and international situation, while Assad affirmed that external greed in countries of our region has never stopped throughout history, adding that the Turkish criminal aggression launched by Erdogan’s regime comes in the context of this greed, despite its false sentiments. It is a blatant invasion and a clear aggression to which Syria has responded in many places by striking its agents and terrorists and Syria will continue to respond and confront it in all its forms in any region of Syrian territory through all available legitimate means.

For his part, Fayyad underlined that both countries are continuing their joint work at various levels to serve the interests of the Iraqi and Syrian people and achieve security and peace in the two countries.