Residents of Daraya have found their properties stripped of furniture, appliances and even the electrical wiring reports Zaman Al Wasl. 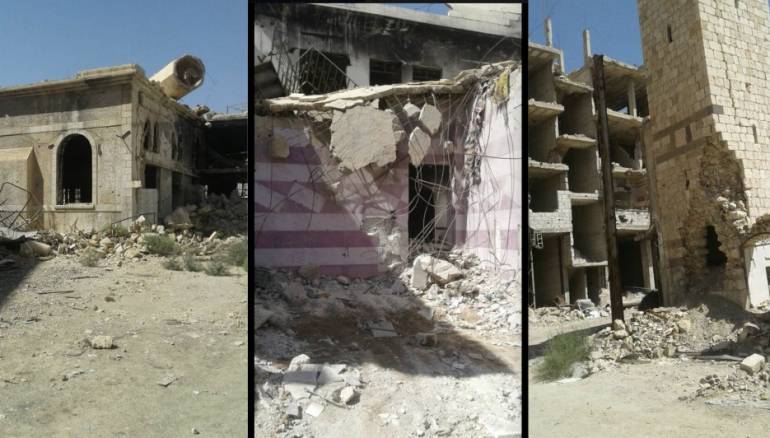 Testimonies from people who entered the capital’s western town of Daraya have confirmed that the regime did not only destroy the neighborhoods with its bombs, but also it entered residential houses, shops and facilities—public and private—stealing everything that they could. The shocking damage extended to the cladding, furniture and infrastructure.

Hassan Dayrani (pseudonym), one of the residents displaced from Daraya at the end of 2012, said that when he visited his house in the Shamiat neighborhood, the closest neighborhood to the road leading to the capital, he was shocked at what was left of the expensive furniture, decor, electrical appliances and luxury home appliances.

“I got a security card that allowed me to visit the city in the daytime, and when I visited it I found the house empty.”

Dayrani had expected the easily carried furniture and other equipment to be stolen, but what he did not imagine was that, “the electricity wires be pulled from the walls, the floor tiles and ceramics be removed… they even uprooted the toilet, which was not ready for use.”

Since the regime’s incursion into the neighborhoods of al-Jamiat and Shridi Square in the winter of 2013, there has been systematic looting of all houses in the area.

Fighter Abou al-Abed, who was stationed in Daraya but chose to move to Idleb on the eve of the evacuation agreement being signed by the rebels with the regime, said, “We heard about the systematic raiding and robbery that the regime carried out in the neighborhoods beyond our control. We did not imagine the extent of the thefts until the first negotiating committees returned from Daraya in 2014 and saw how the city’s buildings and public and private facilities had become empty concrete structures.”

In September 2016, after 1,350 days, fighting ceased in Daraya. Most of the fighters and civilians left the city for Idleb, while some went to regime shelters in Damascus Countryside.

While regime fighters were pushing, months before the evacuation deal was signed, in 90 of the rebel-held neighborhoods, their comrades in the regime army and national defense forces were working to steal furniture and a variety of equipment from homes and shops.

Some residents, who now live near Daraya, accuse Free Syrian Army fighters of stealing from houses that were under their control. However, these accusations appear to be inaccurate, as many people who were inside the city at the time confirm.

Abed, who witnessed the siege, said that he is aware of many incidents of theft. “They were limited because of the strict rules of the rebels’ security office…Yes, we entered civilian houses, but our search was focused solely on food because of the harsh siege.”

Today, residents who wish to enter Daraya must register with the refurbished outpost inside the city and obtain a security card to visit the city. Dozens received these cards but have not returned to live in their homes, because they lack the basic means for living and find nothing but walls.

The eight-year-long war has claimed the lives of hundreds of thousands and forced 13 million people from their homes, half of whom have fled their shattered homeland.