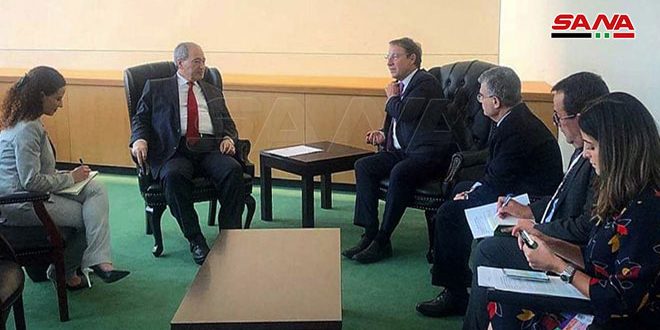 On Tuesday, Deputy Foreign and Expatriates Minister Dr. Faisal Mikdad discussed with the United Nations Development Program (UNDP) Administrator, Achim Steiner, in New York the standing relations of constructive cooperation between the Syrian Arab Republic and the UNDP and the projects implemented by the program in Syria.

They agreed on the importance of continuing and enhancing cooperation in a way that guarantees the needs of the Syrian people.

During the meeting, which was held on the sidelines of the activities of the 74th session of the UN General Assembly, Mikdad welcomed the appointment of a new representative of the program in Syria.

He underlined the necessity of working on sustainable development and humanitarian relief in a balanced way, particularly after the victories achieved by Syria in its war against terrorism and after restoring security and stability to most of its areas, which contributes to pushing the wheel of real development forwards and to supporting the reconstruction and the rehabilitation of the infrastructure.

Mikdad affirmed that Syria hopes that the cooperation with the UN and the UNDP will improve the living standards of the citizens and provide their basic needs, in addition to creating the suitable conditions for the return of the refugees.

He indicated at the same time that the role of the UNDP in that process must remain free from any politicization or pressures practiced by the Western states, which are trying to achieve certain political agendas through the economic pressures and by hindering the efforts of reconstruction and imposing unilateral coercive measures.

For his part, UNDP Administrator Steiner noted that the essence of the program’s work is a developmental one in the first place, affirming that the program understands that improving living conditions and rehabilitating the basic services are considered as main factors for the return of the refugees.

Steiner referred to Syria’s accomplishment of the first national report on sustainable development goals, underlining the importance of that step for reviewing the priorities and challenges that Syria considers as basic for reviving the developmental track.