After years of closure, the main Syrian-Iraqi border crossing has opened, SANA reports 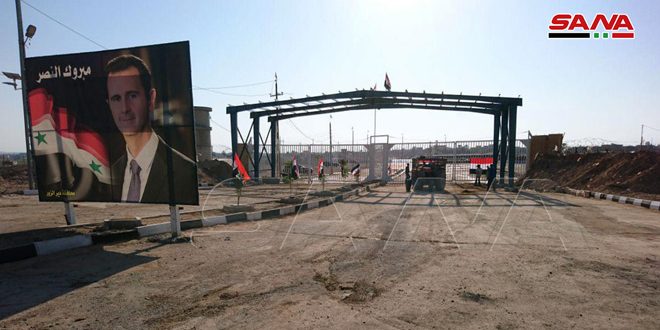 The Al-Bukamal-al-Qaem border-crossing between Syria and Iraq was officially opened on Monday for the flow of goods and people after finishing all the required measures by the Syrian and Iraqi sides.

SANA reporter said that the crossing was opened in the presence of Interior Minister Maj. Gen. Mohammad Khaled al-Rahmoun, and the Head of the Iraqi border crossings, Dr. Kazem Al-Oqabi, the representative of the Iraqi prime minister.

In a statement to journalists, Minister Al-Rahmoun stressed that the great achievement of opening the crossing came thanks to the sacrifices of the Syrian Arab Army and the Iraqi army and the victories of our peoples over the armed terrorist groups, on top of them the Daesh terrorist organization.

Earlier, all preparations for the reopening of al-Bukamal-al-Qaem were completed as the area around the city of al-Bukamal has been declared safe and cleared of Daesh terrorists.

The concerned authorities have completed the necessary preparations for the reopening of al-Bukamal-al-Qaem border-crossing with Iraq in the eastern countryside of Deir Ezzor to be the main crossing gate between Syria and Iraq after years of closure due to the attacks of the Daesh terrorist organizations, SANA reporter said .

On Saturday, the Iraqi border crossings department announced the approval of the Iraqi government to open the al-Qaem-al-Bukamal crossing for the movement of goods and people after completing all required procedures.

On November 19, 2017, the Syrian Arab Army units liberated al-Bukamal and its surroundings after the elimination of the last hotbeds of Daesh.

Syria and Iraq are linked by four border-crossings, the most important of which is the al-Bukamal border crossing which is located between al-Bukamal in the Deir Ezzor province and al-Qaem in the Anbar province.