The presidents of Russia, Iran and Turkey, said that they will continue to work on establishing a constitutional committee and securing Syria's territorial integrity writes SANA. 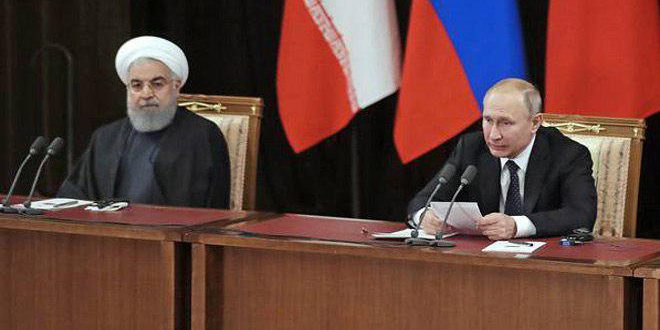 Presidents of the guarantor states of the Astana process (Russia, Iran and Turkey) reaffirmed their firm adherence to Syria’s unity, sovereignty, independence and territorial integrity and the continuous fight against terrorism and a rejection of separatist agendas.

Russian President Vladimir Putin, Iranian President Hassan Rouhani and President of the Turkish regime Recep Tayyip Erdogan met in Ankara on Monday as the concluding statement of their meeting affirmed the firm adherence of the three countries to the sovereignty of the Syrian Arab Republic and its independence, unity and territorial integrity as well as the goals and principles of the United Nations. While asserting the necessity of adhering to these principles and how they shouldn’t be violated in any way, regardless of their perpetrators.

They also underlined the necessity of respecting international resolutions, including the relevant UN resolutions that reject the occupation of the Syrian Golan and Security Council Resolution 497, and they condemned the declaration by the US administration on the Golan, which constitutes a blatant violation of international law and threatens regional peace and security, indicating that Israeli attacks on the Syrian territories undermine stability and violate the sovereignty of the country and its territorial integrity and they increase tensions in the region.

In their concluding statement, the three presidents reiterated that there is no military solution to the crisis and that the only solution will be through a political process led and implemented by the Syrian people, supported by the UN and in accordance with Security Council Resolution 2254.

The statement noted that the three presidents discussed the situation in the Syrian al-Jazeera region and they asserted that security and stability can only be achieved by respecting the sovereignty of the country and its territorial integrity, and they agreed on coordinating their efforts to achieve that goal, and in this regard, they affirmed their rejection of all attempts to create new events on the ground under the pretext of fighting terrorism.

They also asserted their determination to confront the separatist schemes that aim at undermining Syria’s sovereignty and territorial integrity.

The statement added that the three presidents also discussed in detail the situation in the de-escalation zone in Idleb, and they underlined the necessity of the full implementation of all the agreements, including the first memo signed in September 2018.

The presidents, according to the statement, expressed deep concern about the increased presence of Jabhat al-Nusra in Idleb, and they called for continuing cooperation in a way that fully serves the goal of eradicating the organizations of the Islamic State (ISIS) and Jabhat al-Nusra and all persons, groups and other organizations that are affiliated to al-Qaeda, ISIS and other terrorist organizations, which are on the Security Council’s list for terrorist entities. They also agreed on taking tangible measures to guarantee the protection of civilians according to the provisions of international humanitarian law.

They also expressed comfort over the efforts exerted to form a constitutional committee and affirmed their support for the mission of the UN Secretary-General’s Special Envoy to Syria, Geir Pedersen, with regards to facilitating the political process between all Syrian parties and they announced again their readiness to contribute to launching the work of the committee, in accordance with the outcomes of the Syrian National Dialogue Conference in Sochi.

The Presidents of the guarantor states called upon the international community, the UN and the humanitarian agencies to increase their participation and their help to Syria by implementing projects for the reconstruction, basic projects for infrastructure, mine clearance, in addition to increasing humanitarian aid for all Syrians, without any previous conditions and with the aim of alleviating the suffering of the Syrian people.

They underlined the necessity of the international community’s work to the return of those who were displaced due to terrorism to their hometowns in Syria, expressing their readiness to continue to cooperate with all concerned bodies including the United Nations High Commissioner for Refugees (UNHCR) and other specialized international bodies. They agreed on coordinating their initiatives to hold an international conference to discuss the issues of humanitarian aid in Syria and the return of the displaced.

The three presidents decided to hold their next meeting in Iran following an invitation by President Hassan Rouhani.