Bouthaina Shaaban visited Khan Sheikhoun to congratulate the army and promise that every inch of Syrian land will be liberated writes Al-Watan. 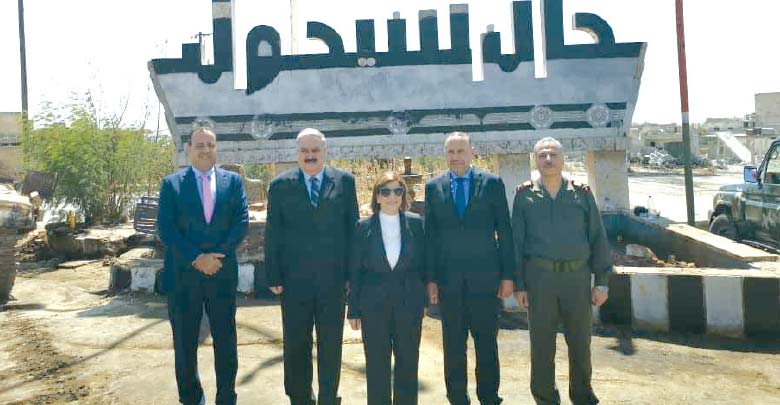 The Political and Media Adviser to the Presidency of the Republic, Bouthaina Shaaban, renewed her assurance that Syria would continue its war against terrorists and that it would liberate every inch of its territory.

Shaaban, speaking during the national forum held by the culture directorate in Hama in the Assad House for Culture under the title “The Syrian National Character: A New Structure,” visited the liberated city of Khan Sheikhoun accompanied by the Governor of Hama, Mohamed al-Hazouri, the Secretary of the Baath Party in the governorate and the head of the Hama police. Shaaban appeared in a photo in front of the city’s entrance, which was retaken by the Syrian army days ago, after years of occupation by terrorists.

During the forum, Shaaban said: “We are celebrating the great victory and liberation of the Hama countryside and Khan Sheikhoun from the clutch of the terrorists … we offer our congratulations to every person in Hama province, in al-Suqaylaybiyeh and Mhardeh, and in every village and town who was steadfast and sent their children to school despite the shells, and continued their work in the workshops, and went on despite the danger and stayed strong and rooted in their land. I say to them that they are partners with the Syrian Arab Army in this victory, because without their steadfastness and their insistence on remaining here whatever the sacrifice, we would not have been able to achieve this great victory.”

Shaaban thanked the Russian, Chinese and Iranian allies and Hezbollah, saying: “We should not forget the double veto of Russia and China against the plots of Western countries, in October 2011, and that after this date, Russia and China cast more than eight double vetos in the Security Council and Russia cast more than 10 vetos related to Syria and stopped our enemies from their plots and domination over Syria—and this is priceless.”

The Director of the Political Directorate in the Syrian Arab Army, Major General Hassan Ahmed Hassan, said in an interview with Al-Manar that, “There would not be a single inch of Syrian territory cut off from Syrian sovereignty and what is currently happening in Idleb will be a prelude to a cleansing of all Syria.” He said at the same time that, “it is not a mistake to build on Russian diplomacy and its ability to influence Turkey,” saying that

Responding to a question about the fate of the terrorists, especially since there is no longer another Idleb to transfer them to, Hassan said: “The so-called sayings or proverbs say that when the price of feed is more than the price of livestock, the herdsman doesn’t hesitate at all to slaughter the livestock. What’s absolutely certain is that the American-Zionist herdsman won’t hesitate to slaughter the livestock.”