Syria’s Permanent Representative to the UN said that Israel must be forced to adhere to the nuclear proliferation treaties and to subject all its facilities to a safeguarding system writes SANA. 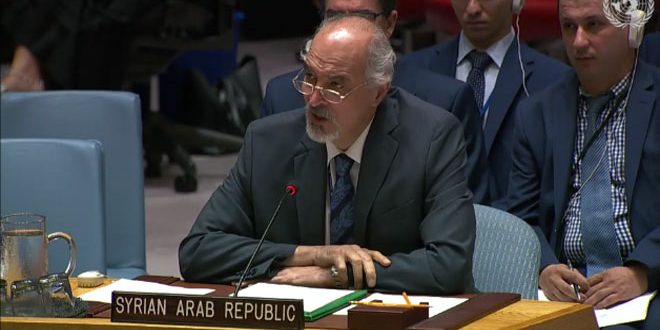 Syria’s Permanent Representative to the UN, Bashar al-Jaafari, stressed the need to eliminate the US and Turkish occupations of Syrian territories and to end their aggressive practices, support for terrorism and the crimes they commit against Syrians and Syrian infrastructure.

At a meeting of the Security Council, Jaafari urged the US and its allies, including the Turkish occupation forces, to end their illegitimate military presence in Syria and to stop their crimes against Syrians.

He pointed out that over the past two days, the Turkish regime had brought vehicles loaded with weapons and ammunition into the country, as well as Uzbek, Tajik and Caucasian mercenaries and terrorists via the Turkish borders, into Idleb to support the terrorist organization of Jabhat al-Nusra, who are inscribed on the list of international terrorism.

Jaafari added that the lack of peace and security in the Middle East was because of the subversive foreign interventions in the affairs of the region’s countries, including attempts to change regimes by force, investments in terrorism and the creation of crises and wars fabricated to seize the wealth of the region.

“The ultimate reason behind the conflicts and the absence of peace and stability has always been the Israeli occupation of Arab territories, including the Syrian Golan and not racist, religious or sectarian factors as propagated by some parties; ideas which are used to crumble the countries of the region and weaken its peoples,” said Jaafari.

He pointed out that the absence of the necessary mechanisms to enforce the UN Security Council’s resolutions on the Arab-Israeli conflict has led to the continuation of this occupation and encouraged the US to evade its commitments in this regard.

Jaafari noted that adherence to UN principles and charters also implies the immediate and unconditional lifting of unilateral and illegal coercive measures that affect the peoples of the region and constitute “economic terrorism”.

On the other hand, Jaafari emphasized the need to address the threats posed by the arsenal of the Israeli occupation entity to the countries of the region and to force it to adhere to the nuclear proliferation treaties and to subject all its facilities to the safeguarding system of the International Atomic Energy Agency.

Jaafari called for the adoption of the Syrian initiative to create a zone free from all prohibited weapons in the Middle East.

Regarding the situation in the Gulf, Jaafari condemned the policies aimed at igniting new crises and wars to divert the peoples of the region from their main cause of ending Israeli occupation and confronting attempts of hegemony that aim to control the wealth of the region.

Finally, he called for a serious and effective approach to resolve the reasons for instability in the region away from the selectivity and duality of criteria.