Following a night-time attack by regime forces, the city of Khan Sheikhoun has fallen with opposition fighters withdrawing from the area writes Al-Modon. 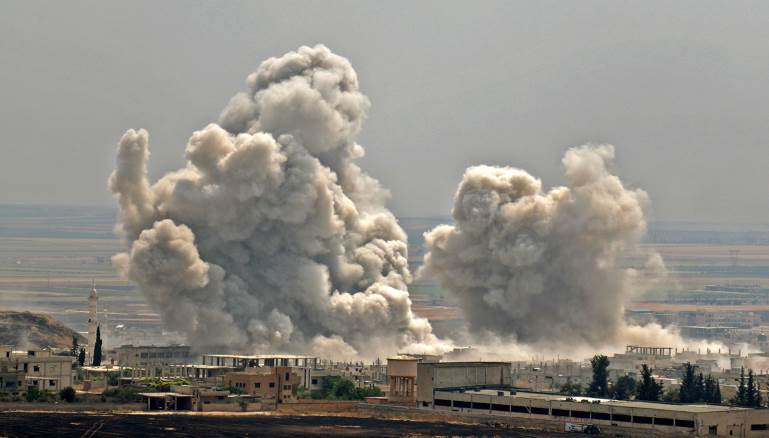 On Tuesday morning, regime forces managed to take control over the city of Khan Sheikhoun and the surrounding hills and positions while the armed opposition withdraw from its positions on the front lines in the northern Hama countryside.

Regime forces on Monday/Tuesday night carried out a broad land assault from three directions to take control of the remaining hills, wilds and fortified positions on the eastern, northern and western outskirts of Khan Sheikhoun. They also managed to take control over the al-Salam checkpoint and the Horsh hill and a number of checkpoints and positions on the main and side roads leading into the city through its suburbs. The forces intensified their land and aerial bombardment which struck every district of Khan Sheikhoun, while warplanes monitored the movement of the opposition and their supply lines on the outskirts.

Regime forces entered the northern and north western districts and deployed more than 1,500 fighters from the Fifth Corps and the Tiger Forces and the al-Quds Brigade and Republican Guard, as well as units from the 9th, 7th, 8th and 11th Divisions along the whole line, with more than 30 tanks and vehicles equipped with heavy machine guns. They managed to encircle the city’s eastern districts, east of the international Aleppo-Damascus highway, and clashed with the opposition in the city in the middle of the night.

A number of opposition and Islamist groups decided early on to withdraw from the city because of the heavy fire pressure and the heavy regime assault. Some other groups decided to stay and resist. Heavy clashes broke out in Martyrs Square and alongside the international highway in the eastern districts in the middle of the night. The opposition managed to kill more than 20 fighters and destroy a tank. But the resistance failed to stop the advance of regime forces, and they lost a number of fighters and decided to withdraw to the outskirts of the city at dawn.

Khan Sheikhoun is a major city and despite the enormous destruction due to the recent regime bombardment, it had held out until forces entered and street fighting began.

An opposition military source told Al-Modon that the Khan Sheikhoun battle had been imbalanced, not only due to the volume of firepower, but also because of their observation and maneuvering capabilities. Regime forces, as in previous battles, benefited greatly from night-time fighting and had night vision equipment and thermal monitoring which allowed them to see and target their rivals from near and short range.

According to the source, the factors that prevented the city from holding out included taking control over the city’s environs and the hills overlooking the supply routes, which forced opposition fighters to withdraw out of fear of a siege.

It appears that the opposition had not previously planned to hold out in Khan Sheikhoun and before that in a large number of villages and towns, saying it was a tactical withdrawal that was necessary to avoid attrition in battles that had no value at the current time.

A few hundred fighters in the National Front for Liberation, Hay’at Tahrir al-Sham and Jaish al-Azzeh, and others defended the city. If there had been a plan to hold out and enter into a street battle with the regime, the opposition would have sent a larger number of fighters to defend the city, especially given that the decision to hold out would have been very costly.