In an effort to curb the rise in crime, the city of Azaz has banned the wearing of masks for both civilians and military personnel reports Enab Baladi. 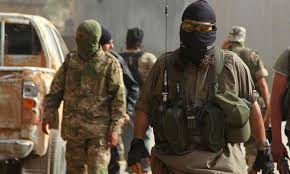 The local council in the town of Azaz in the northern Aleppo countryside has forbidden the wearing of masks for all residents and militants in the city and its environs to limit the problems and crimes carried out in the area.

The council said in a statement seen by Enab Baladi on Wednesday, that: “it is strictly forbidden for military personnel and civilians to wear masks, under penalty of law and the implementation of penalties against them.”

The statement added that this was to, “preserve security in the city of Azaz and its countryside and improve the flow of work and the public interest, in light of the problems which have occurred in the city because of masks and the inability to identify people when they commit crimes.”

The cities of the northern Aleppo countryside under the control of the opposition, especially Azaz, have seen increasing numbers of security incidents including crimes and assassinations, as well as bombings continuously targeting residential districts.

The legal committee in the city of Jarablus in the eastern Aleppo countryside last March published a decision preventing the wearing of masks that obscured the face, against the backdrop of repeated assassinations by masked people carrying silenced weapons.

The use of masks has spread since a number of regions split away from the Syrian regime, with fighters’ masks becoming a basic component along with weapons and ammunition.

Over the past two years they have been connected with kidnappings, thefts and explosions, especially in Idleb province, which is controlled by Hay’at Tahrir al-Sham and opposition military groups.