Ahead of the latest round of talks in Astana, the two sides have discussed the voting mechanisms for the constitutional committee and a political solution to Idleb writes Al- Watan. 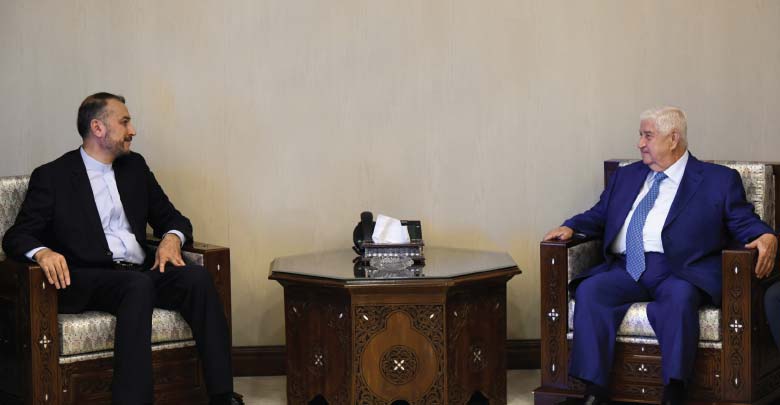 Informed sources said that the special aide to the president of the Iranian Islamic Parliament, Hossein Amir-Abdollahian, brought an “unannounced” initiative to President Bashar al-Assad from Supreme Leader Ali Khamenei regarding confronting the so-called “Deal of the Century” and that the Idleb issue is “heading toward a political solution” soon.

The sources said that something “will happen very soon” with regards to Idleb, adding that the, “issue is headed toward being solved politically in agreement with Turkey,” and that Iran would have a role in that, especially given the strong relations between Ankara and Tehran.

In a statement to Al-Watan, the Vice President of the Syrian-Iranian Friendship Association in parliament, Hossein Raghab al-Hossein, who attended Abdel Lahyan’s meeting, said that the visit aimed to strengthen consultation, coordination and cooperation between the two countries in various fields, especially politically.

Raghab said that the purpose of the visit was to hold discussions with the Syrian leadership before the upcoming Astana meeting, which will focus on the lack of compliance by the Turkish guarantor and its promises from the “Sochi agreement” regarding Idleb, and its clear support for terrorist organizations.

He said that the discussions by Syrian officials with Abdel Lahyan revolved around the latest developments in the efforts of the UN Special Envoy to Syria, Geir Pedersen, to form a committee to discuss the constitution.

He said that there was a deep discussion around how to confront “Israeli” aggressions on Syrian territory.

Raghab noted that Abdel Lahyan had informed the Syrian leadership about the latest diplomatic developments regarding containing the American escalation against Iran and the Iranian efforts to guarantee the security and freedom of shipping in the Arab Gulf, as well as Iran’s efforts to confront economic sanctions by building a resistant economy and building a regional economic space with friends of Iran, Russia, Iraq and Syria.

In a similar statement to Al-Watan, the parliament member and member of the Syrian-Iranian Friendship Association, Mohammad Bashir al-Shurbaji, who attended the meeting as well, said the he had discussed the positive developments to form a committee to discuss the constitution.

He said that agreement was noted regarding the names around which there had been dispute, but that there was still a disagreement with regards to the working mechanism of the committee and the voting mechanism for the decisions and the meetings. He added that Syrians were calling for there to be votes with an absolute majority of 75 percent of members, as “it’s not reasonable that the country’s fate should be decided by a simple majority of views.” He said that the announcement of the committee’s formation rested on resolving the question of the voting rates.

He said that the voting mechanism would be agreed upon in the upcoming tripartite conference of the Astana guarantors—Russia, Iran, and Turkey—and that this could be achieved at the end of the month or the start of next month.

According to Shurbaji, the Deputy Foreign Minister Faisal Mikdad said during the meeting that the Syrian objections to some names was because they were terrorists and their hands were soaked with blood.

He added that, “President Assad did not object to these names, because he believes that the Syrian people should see the true face of these terrorists, who are paid by the West to amend the constitution, which will determine the shape of the Syrian state and its future. Syrians will be sure of the truth about the and their efforts to destroy Syria.”