Mahmoud Al-Zahar, a co-founder of Hamas, said that it was in the interests of Hamas to have good relations with all the countries that oppose Israel writes Al-Araby Al-Jadeed. 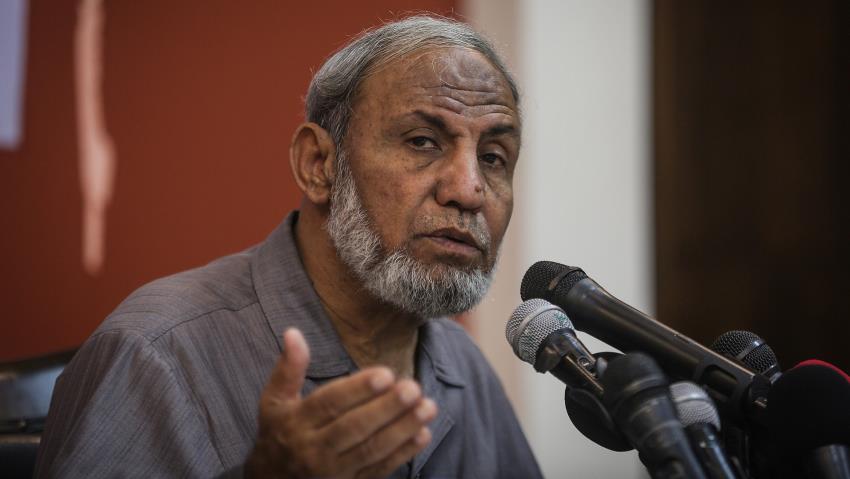 A senior member of Hamas’s political bureau has sparked controversy on social media with remarks which appeared to praise the regime of Syrian president Bashar al-Assad and reverse eight years of Hamas policy towards Syria.

Mahmoud Al-Zahar, a co-founder of Hamas and a former foreign minister of the Hamas-led Palestinian Authority government which was in place between 2006 and 2007, said on Wednesday that Al-Assad “had opened up the whole world to us” and that “we could move in Syria as we did in Palestine”.

In his statement, Al-Zahar lamented the fact that “relations had collapsed because of the Syrian crisis” and said that “we shouldn’t have left him [Al-Assad] or got involved either with or against him over the course of the crisis”.

He added that there were “urgent efforts to restore relations but that the Syrian state feels wounded by what relations have become, and it is in our interests to have good relations with all the countries that oppose Israel, foremost among them Syria, Lebanon, and Iran.”

Hamas enjoyed good relations with Syria before 2011, with the Hamas leadership-in-exile, headed by Khaled Meshaal, being based in Damascus.

However, after the Assad regime brutally suppressed the anti-government protests of the 2011 Syrian uprising, Hamas refused to make any statements supporting the regime and  leaders within the group, including Meshaal, soon found themseleves unwelcome in Damascus.

Meshaal and other Hamas leaders relocated to Qatar, while the Assad regime bombed and besieged Palestinian refugee camps in Syria that had fallen under the control of Palestinian groups sympathetic to the Syrian opposition, such as the now defunct Aknaf Beit al-Maqdis, believed to be an offshoot of Hamas.

Nearly 4,000 Palestinians have been killed in the Syrian conflict, according to the Action Group for Palestinians in Syria, some of which as the result of a “starvation siege” imposed by the Syrian regime on residents of the Yarmouk refugee camp south of Damascus.

Hamas’s refusal to back the Syrian regime and apparent sympathy with the 2011 Syrian uprising caused a rift not only with the Assad regime but with its other allies Iran and the Lebanese Hizballah group, which actively support the regime.

Hamas has recently been working to restore relations with Iran and Hizballah, as it faces not only the enmity of Israel, but the hostility of Saudi Arabia, the UAE, and Egypt, who see it as part of the Muslim Brotherhood.

Al-Jazeera’s Arabic website quoted unnamed sources as saying that Iran was trying to mediate a restoration of ties between Hamas and the Assad regime and there was currently a difference of opinion within Hamas regarding the move.

Zahar’s statements in support of the regime received heavy criticism from Palestinians and Syrians.

Al-Jazeera quoted Palestinian-Jordanian political analyst Yasser Al-Zaatreh as saying “the blockade imposed on Hamas by some Arab regimes has led it to Iran”. Since 2007, the Hamas-run Gaza Strip has been subjected to a crippling siege by Israel. Egypt has also kept its border with Gaza closed.

On Twitter, however Zaatreh said that Zahar had taken “a dismal position which is not in accordance either with principles or interests”.

But Syrian journalists sympathetic to the opposition opined that Zahar’s views did not represent Hamas as a whole.

Faisal Al-Qasim, the presenter of Al-Jazeera’s popular Opposite Direction programme said in a tweet addressed to Zahar, “How can we believe that you are defending the oppressed Palestinian people if you’re praising those who killed and displaced half the Syrian people and destroyed their country?”.

In a later tweet, he said, “I have no doubt that Mahmoud Zahar doesn’t represent most of Hamas… let’s not forget that Hamas lost everything in Syria because of its support of the Syrian people”.

Hundreds of thousands of people have been killed and millions displaced in the Syrian conflict, mostly as a result of regime bombardment of civilian areas.