Deputy Prime Minister Walid al-Muallem said that progress has been made on the composition of the committee to discuss the constitution writes SANA. 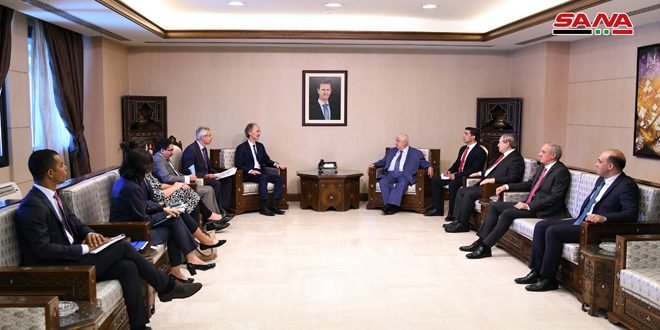 The meeting focused on forming a committee to discuss the constitution and the procedures of its work. Viewpoints were consistent as the two sides consider the constitutional process a Syrian affair and that the Syrians are the only side to lead this process and determine the future of their country without any foreign interference and in accordance with their interests.

The two sides also stressed the importance of constant coordination, to guarantee the success of the UN Special Envoy’s mission, with regards to facilitating the intra-Syrian dialogue and the work of the commission in a way that helps restore stability and security to the whole country and preserve territorial integrity.

The talks were held in a positive and constructive atmosphere with considerable advance achieved and an agreement on the make up of the committee to discuss the constitution formation is near.

In a statement to journalists, Pedersen considered talks with Muallem as “good” and pointed out that there was a considerable advance in the talks but that there is still more to be discussed.