As the 61st Damascus International Fair approaches, Venezuela’s Ambassador in Damascus has said that there are a number of companies from his country that wish to participate writes SANA. 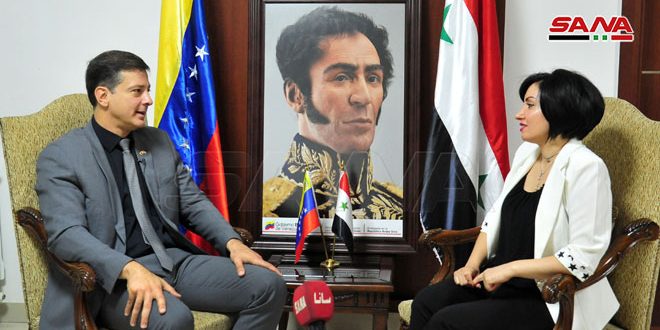 Venezuela’s Ambassador in Damascus, Jose Biomorgi, affirmed that there is a mutual desire to upgrade economic relations between Venezuela and Syria to match the level of the political relations.

The Venezuelan Ambassador said in a statement to SANA that his country will participate in the 61st edition of the Damascus International Fair, “which is considered a landmark economic event and a major opportunity for enhancing economic relations between the two countries.”

He added that the event is also an, “opportunity for showcasing capabilities and providing support in different domains, whether with regards to the reconstruction or production and different means of trade and economic exchange between the two countries.”

Ambassador Biomorgi noted that coordination is ongoing with a number of trade activities and businessmen in his country to attract them to participate in the activities of the Fair.

He added that a number of the Venezuelan companies confirmed their desire to participate in the Damascus International Fair, indicating that these companies work in the domains of energy, medicines and food, in addition to several companies that work in the field of reconstruction.