Hussam Eddin Ala accused the international investigation committee on Syria of fabricating material about what is happening in Syria northern territory writes SANA. 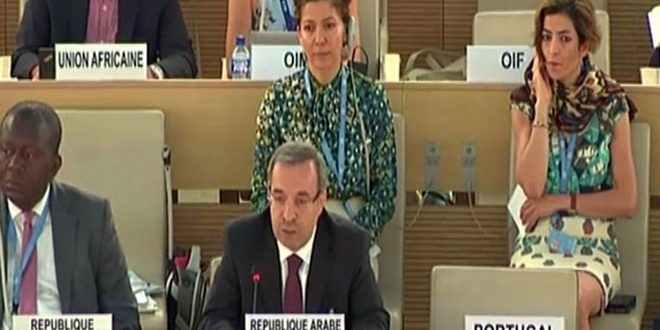 Syria’s Permanent Representative to the UN and other international organizations in Geneva, Hussam Eddin Ala, said that the briefing by the head of the international investigation committee on Syria included baseless allegations on the situation in Idleb that demonstrate a selective approach.

In a statement on Tuesday before a meeting of the Human Rights Council to discuss human rights in Syria, Ala said that the so-called “interactive dialogue” with the committee is lacking, as the time allocated to Syria is restricted compared to the time given to the committee to make claims and accusations, all while depriving Syria of the sufficient time to refute those claims.

He said the current form of the dialogue only seeks to defame Syria, criticizing the handful states that take over the discussion and promote positions that are contradictory and employ double standards, mainly Britain.

Ala said the aforementioned briefing is recycled and fails to address the suffering of Syrians caused by terrorism and sanctions. Instead it promotes the positions of the states that control the committee so that they can continue leveling false accusations at the Syrian government.

He asserted that the allegations about the situation in Idleb are baseless, and that the refusal of the committee to hold the US and the militias under its control responsible for the terrible conditions of the civilians held against their will at the al-Rukban and al-Hol camps is evidence of its selective approach.

Ala pointed to the recent Israeli attack on Syria, which claimed the lives of four civilians including an infant girl and injured 21 others, and caused damage to houses and properties, saying that the investigation committee finds no reason to investigate or condemn such breaches of international humanitarian law, much like how it ignores the many airstrikes carried out by the US, France and Britain, which claimed the lives of thousands of civilians and caused massive destruction in Raqqa city.

He said discussions will remain pointless unless they address the factors that cause humanitarian suffering accurately, primarily terrorism and the role of the states that sponsor terrorism and impose sanctions on the Syrian people.

Ala said the accusations of the Syrian state and its allies deliberately targeting civilians and civilian facilities in Idleb are baseless, as operations there target terrorism with precise and calculated strikes, noting that over 90 percent of Idleb and its surroundings are occupied by terrorist groups affiliated to and led by Jabhat al-Nusra, which attack civilians indiscriminately in Aleppo, Hama, and Lattakia.

He said that it is the duty of the Syrian state to liberate its lands and rid its people of terrorists, asserting that the Syrian government has taken all possible precautions to protect civilians and infrastructure, and that no hospitals or schools have been targeted as some impartial sides claim.