Saudi minister Thamer al-Sabhan has visited parts of eastern Syria under the control of the Syrian Democratic Forces to form an Arab force with members of the Arab tribes at its core repots Al-Modon. 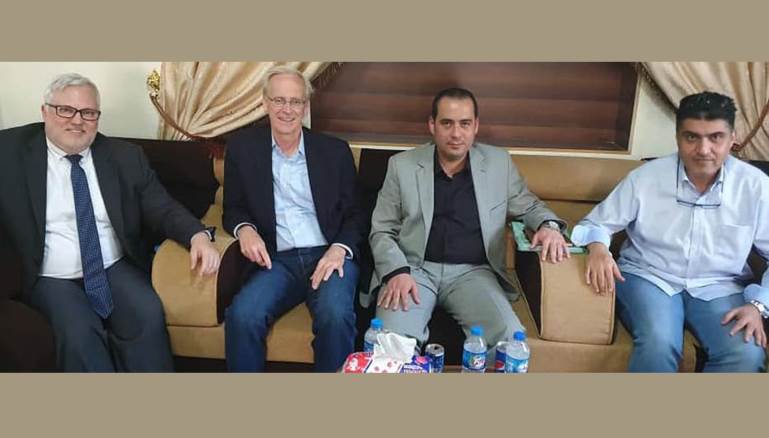 Two helicopters landed in the Saudi-American base, northwest of the city of Manbij, a few days ago, with Saudi minister Thamer al-Sabhan on board one of them to continue his tour of parts of eastern Syria under the control of the Syrian Democratic Forces (SDF), according to Al-Modon’s correspondent Adnan al-Hussein.

Afterward, Sabhan headed in a convoy of three American military vehicles to Manbij, vowing to offer major support to the region in exchange for some conditions. The secrecy which accompanied the visit—the first of its kind—indicates that Saudi Arabia is trying to avoid an escalation with Turkey, at least superficially.

Immediately after his arrival, Sabhan held a broad meeting with the SDF’s “civil council,” responding for running affairs in Manbij. The meeting addressed the continuation of support for the council’s projects, and offering additional support to the city and services there. The council  has been working to pave roads, build additional bridges and raising the level of services.

Sabhan met with Manbij tribes as part of his intensive project to form an Arab force with members of the Arab tribes at its core, which would be linked to Saudi Arabia and under the authority of the SDF and the protection of the United States.

Although the Manbij tribes are considered to be an extension of the tribes of Raqqa and Deir ez-Zor—which Sabhan has previously visited—the main aim of the Manbij visit was to keep the tribes out of the Turkish axis. A substantial portion of the Manbij tribes had left and settled in areas controlled by the Free Syrian Army north of Aleppo, and are now in Turkey’s orbit. Manbij’s tribes are considered to be the spearhead in any coming military operation by Turkey to take control of Manbij.

The aim of Sabhan’s visit is the beginning of the second stage of the war against the Islamic State and to develop the areas under the control of the International Coalition. It has taken on a tribal character in order to heal the rifts between the tribes and the SDF. The visit is also an attempt to win over the tribes and keep them away from Turkey, through Saudi support to build up military councils under Arab command, in a superficial division of powers within the SDF.