The Syrian regime, backed by Russia, is continuing its attacks on opposition positions in the Hama countryside, forcing them to change their tactics writes Al-Modon. 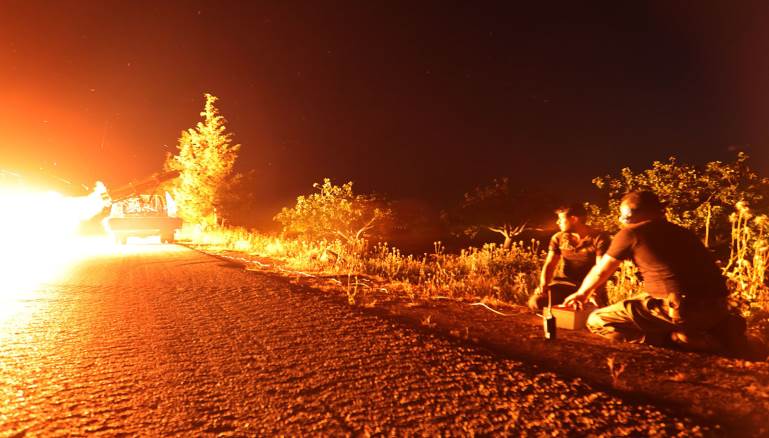 Opposition military groups raided regime forces in the northern Hama countryside on Monday/Tuesday night in an attempt to reshuffle the cards and encircle the regime forces stationed in Kafr Nabudah near Jebel Shahshabo.

During their attack, the rebel groups struck the villages of al-Hamameyat and al-Jabin as well as the strategic Tal al-Hamameyat and the town of Kafr Nabudah. Their land attack was preceded by preparatory shelling of regime positions with rockets and artillery to break their first defensive lines.

The opposition managed to enter the town of al-Hamameyat and its hills, and reached the outskirts of Jabin. They took control of the positions that they progressed towards, before withdrawing after heavy clashes.

Regime forces struck the opposition’s rear supply lines with hundreds of rockets and artillery shells, with warplanes helping them stop the attack.

An opposition military source told Al-Modon that the opposition forces were using a new tactic in their fight against regime force, which was to exhaust the attacking forces through raids, after they were able to absorb the militia attacks. The opposition has developed a long-term defensive strategy of draining the enemy forces followed by a stage of liberating areas from regime forces.

A commander in Jaish al-Azzeh, Colonel Mustafa Bakour, told Al-Modon that: “this operation can stop the regime militias’ advance. The Russians are trying to take control over what remains of the liberated areas after destroying them. These sorts of operations can stop the advance of the Russian-backed forces. The latest battle killed dozens of regime forces and destroyed equipment and other loot and forced the Russians to halt their attack on the area, even if temporarily.”

Bakour downplayed the chance of the Turkish observation points withdrawing despite the heavy pressure Russia was putting on them. The Turkish point in Jebel Shahshabo in Sahel al-Ghab is no more than four kilometers from the front lines and has been caught up in operations more than once.

Jaish al-Azzeh, groups of the National Front for Liberation (NFL) and Hay’at Tahrir al-Sham have participated in the recent fighting. There has been direct participation from the commanders of these groups in leading operations on the ground with an operations room set up to coordinate between them.

Regime forces in this fighting have lost 26 soldiers, including a colonel, a captain and a lieutenant. A commander in the Fifth Storm Corps, Khairat Ahmed Kahla, was wounded near al-Suqaylaybiyah. Kahla is leading Fifth Corps formations in the Hama countryside fighting. Russian forces and the commanders of formations loyal to it are using Suqaylaybiyah as a command center. The opposition has observed an Air Force Intelligence center in the village of al-Asharenah near Suqaylaybiyah that Suhail al-Hassan is using as a headquarters and following developments intensively.

Rebel groups are engaging in heavy fighting against Russian-regime militias on the Horsh al-Karkat and Sheikh Idriss village front in the northwestern Hama countryside. Regime forces in this fighting have suffered heavy losses of fighters and equipment. In the latest battle a decrease of participation by the Tiger Forces has been notable, with the Fifth Corps and Liwa al-Quds taking over.

After the rebel groups held onto territory and moved towards developing battles of attrition, it appears that the Russian command has preferred to preserve its elite forces from the Tiger Forces militia and send more “reconciliation” and Fifth Corps fighters. The Tiger Forces who are participating in the Hama fighting include the al-Hadi Regiment, most of whose fighters are from Masyaf, the Taha Regiment and Haydar Regiment from the coast, as well as al-Tarmah from the city of Qomhane and Hama.

The National Defense militia led by Nabel al-Abdullah and Simon al-Wakeel, backed by Russia, have been tasked with supplying the attacking forces because they know the area, as well as securing protection for the Russian fighters participating in the fighting on the back lines. They are also taking part in shelling along with Ninth Division forces and the 11th Division.

Rebel groups have bolstered their positions on all front lines with the regime militias from the western Hama fronts up to the northern Hama countryside. Military reinforcements have arrived from the NFL and Tahrir al-Sham has pushed more of its forces to the fighting areas. The rebel groups have also worked to form support teams in case major pressure falls on one of the fronts.

After the latest attack on regime areas in the northern Hama countryside, regime forces increased their bombardment on the city of Kafr Zeitah and the village of al-Arbain. Helicopters have dropped barrel bombs. The Russian base near Halfaya has bombarded the area with phosphorus and the bombardment has killed civilians from the city of Ltamenah and has been a source of rocket fire from the Russian brigade near Maardes.

Warplanes and helicopters have also bombed the villages and towns of Jebel Shahshabo with dozens of airstrikes and barrel bombs, while helicopters and rocket launchers have struck the towns of al-Habeet, Khan Sheikhoun and its environs in the southern Idleb countryside.