During a meeting with Iranian Foreign Minister, Mohammad Javad Zarif, Sergey Lavrov reiterated that the terrorists in Idleb must be eliminated reports SANA. 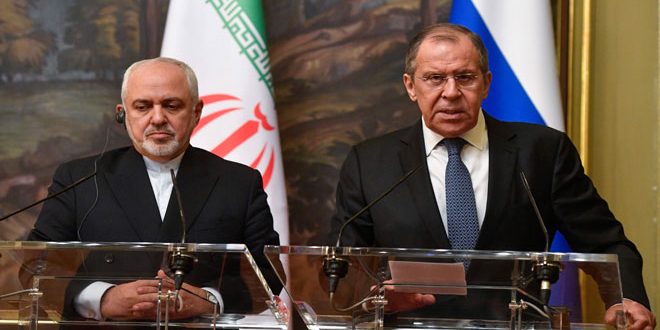 Lavrov’s remarks came during a press conference with his Iranian counterpart Mohammad Javad Zarif on Wednesday in Moscow.

Lavrov said that the terrorist organisation Jabhat al-Nusra controls most of Idleb’s area and continues to target civilians, positions of the Syrian Arab Army and the Hemeimeem Airbase, which cannot be allowed.

Lavrov stressed that the situation in the al-Jazira region is concerning and Washington’s behaviors in Syria violate UN Security Council resolutions, which stress an abidance to Syria’s unity and territorial integrity.

For his part, Zarif affirmed the necessity of continuing efforts to find a political solution to crisis in Syria, pointing out the importance of the Astana formula to make progress in this regard.