The Deputy Foreign Minister, Faisal Mikdad, has lashed out at the economic measures imposed on Syria and the effect that they are having on citizens writes SANA. 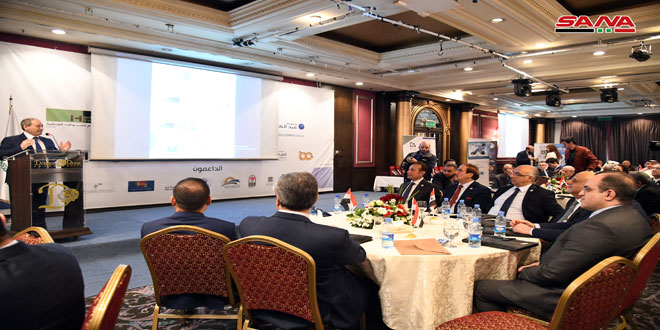 Deputy Foreign Minister, Faisal Mikdad said that the war in Syria had not ended, as represented by the imposing of unilateral coercive economic measures, which contradict international law and the principles of international legitimacy.

Delivering a speech during the opening of the Arab Economic Exchange Forum held at the Damascus-based Dama Rose Hotel on Wednesday, with the participation of Arab and foreign nations, Mikdad said that hostile countries use inhumane means in the blockade against Syria.

Mikdad wondered: “How thousands of Syrians queue at petrol stations, due to the unilateral coercive economic measures imposed by the West and the US dictations, while the Arab region gives away oil to the rest of the world and Syrian children die from exposure.”

Mikdad called for all the challenges and the economic warfare, waged against the Arab nation, to be confronted and the implementing of joint Arab agreements and treaties, in addition to stimulating the potential of the Arab people and taking the initiative,” to prevent the transformation of the Arab World into isolated cantons.

He reiterated Syria’s firm position on the need to increase Arab investments and give priority to cooperation in joint Arab private and official projects.

Mikdad said that the United States, its allies and the Zionist entity seek to weaken the Arabs and exploit them humanely and economically in order to preserve its hegemony and the dominance of the Israeli occupation entity in the region.

The US administration’s stances on the occupied al-Quds, the occupied Syrian Golan and Iranian Revolutionary Guard constitute a crime, Mikdad said.

He indicated that the reconstruction stage has begun in Syria, adding that Syria is able to reconstruct thanks to the efforts of its people and loyal friends.

Regarding displaced Syrians and refugees , Mikdad indicated that Syria is making great efforts for their return to the homeland despite of the existence of countries known to impede their return, in order to exploit them as a political paper in human clothing.