At the 5th Yalta International Economic Conference, Crimea and Syria have discussed strengthening ties between the two countries and establishing a joint commercial house writes SANA. 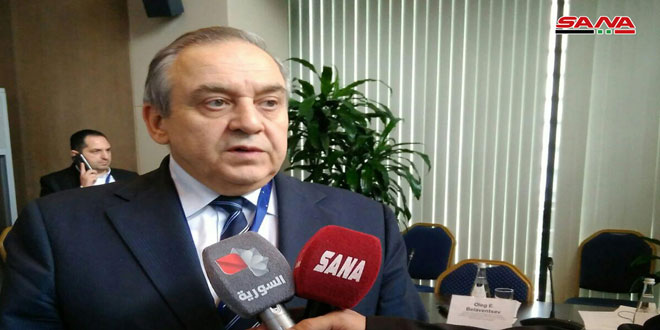 Crimea’s Deputy Prime Minister and Permanent Presidential Representative of the Republic of Crimea, Georgy Muradov, has underlined the importance of the Syrian delegation’s visit to Crimea and its participation in the 5th Yalta International Economic Conference.

In an interview with SANA in Moscow, Muradov described the “important, useful and constructive” talks between the Crimean and Syrian delegations.

He welcomed the enhancement of the deep-rooted relationship and friendship with the Syrian people.

The Crimean official pointed to the importance of establishing the joint commercial house between Syria and the Crimea.

He said that the establishment of a maritime shipping company between the two countries is underway.

The cultural and human cooperation between both sides and the exchange of expertise in archaeological excavations were also discussed between the Syrian and Crimean delegations, according to Murafov.

Earlier, the President of Crimea, Sergey Aksyonov, discussed with the Syrian delegation to Yalta, headed by Minister of Economy and Foreign Trade Dr. Mohammed Samer al-Khalil, the economic cooperation between the two sides.

The two sides stressed, in a statement issued at the end of the talks, their common interests and the desire to further develop relations in all fields.