Heavy damage was inflicted on educational facilities during the battle to retake eastern Ghouta, but efforts are being made to see the return of children to classrooms writes SANA. 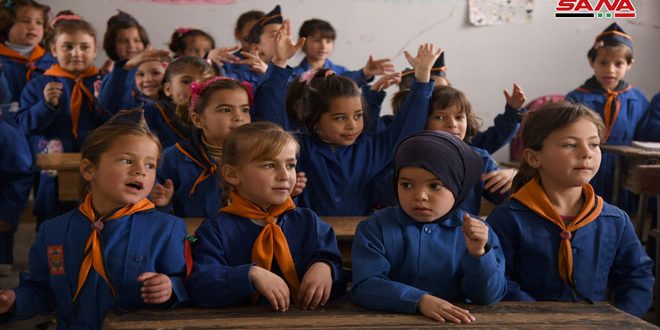 A year after liberating eastern Ghouta in Damascus Countryside from Takfiri terrorism, relentless efforts, in cooperation with the locals, international organizations and civil society groups, have been exerted to upgrade the educational sector and to rehabilitate a large number of schools.

Due to the importance of the educational sector, immediately after liberation from terrorism, the Education Ministry in cooperation with the Damascus Countryside Governorate, formed a team to work on upgrading this sector, particularly by rehabilitating and maintaining educational buildings, in order to ensure a speedy return for students to their schools.

“Through the investment plan, 55 schools have been rehabilitated, and 76 others are within the emergency plan, in addition to rehabilitating 80 more schools in cooperation with international organizations,” the head of Damascus Countryside Educational Directorate, Maher Faraj, told SANA.

Faraj added that heavy damages were inflicted upon the educational sector, which are expected to cost as much as 32.5 billion Syrian pounds, indicating that all possible efforts have been exerted to provide the required psychological and social support for the students upon their return to school.

The number of students who have joined the educational sector in eastern Ghouta has reached up to 125,000 out the previous 500,000 students.

Throughout the terrorist war waged against Syria, 219 schools in eastern Ghouta went out of service, of which 211 have been rehabilitated and put into service, according to Faraj.

He added that more than 35,000 students have followed the curriculum category (B) to compensate them for the missed lessons during the past years and to integrate them into their age groups and the classrooms that fit their ages.

The Ministry of Education works on providing schoolbooks for students by opening distribution centers in eastern Ghouta and in Yelda and Babbila, and there is a plan to increase the numbers of these centers to reach other areas and to provide a developed curriculum and distribute books among students.

After the return of security and safety to eastern Ghouta, thanks to the Syrian Arab Army, the number of students who have joined schools is continually increasing, particularly after the return of the locals to their houses.

Immediately after liberating eastern Ghouta from terrorism, and in cooperation with the locals, rubble was removed and the doors and windows of the classrooms were fixed, and the educational process started again as teachers doubled efforts to provide a good educational environment for the students, according to Hala Abou Rabi’a, a director of one of the schools in Jisreen in eastern Ghouta.