Foreign Minister Walid al–Muallem has reiterated that nothing will change Syria's position regarding the occupied Golan and that they are ready to respond in any way writes SANA. 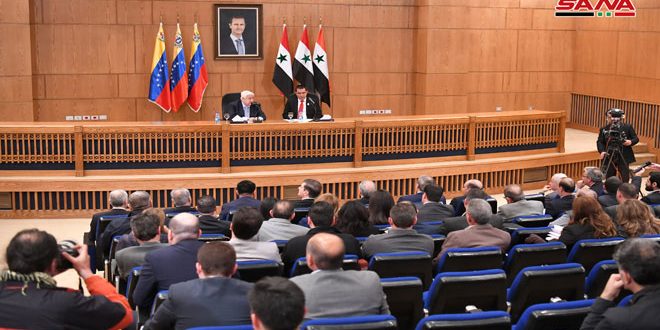 Foreign Minister Walid al–Muallem, stressed that Syria’s claim to the occupied Syrian Golan is firm and cannot be changed by time, and that every inch of the occupied Syrian territories will be liberated, whether in the south or in the north, clarifying that the war against terrorism has not finished, as the country is facing now an economic war; he showed confidence that the Syrian people will overcome it.

Muallem said in a press conference held on Thursday with his Venezuelan counterpart, Jorge Arreaza,  that the US President Donald Trump’s decision on the occupied Syrian Golan has a single effect as it only enhanced the isolation of the US.

“Syria will liberate the occupied Golan by all means and all choices are on the table,” Muallem affirmed.

He added that, “Israel mustn’t go far…We have will and determination and the war we have waged since 2011 is to protect Syria’s sovereignty and independence and to liberate every inch of its territories.”

He added: “The mistakes of Erdogan’s policies and his support for terrorism in Syria have been clear through the results of the latest Turkish elections.”

“The US administration lies about pulling out its troops, which are illegitimately deployed in Syria, and it isn’t our duty to teach them to be honest,” Muallem said.

Regarding the situation in al-Jazira region, Muallem said that there are Arab tribes and a group of Kurdish Syrian citizens in the northeast of Syria, and we hope that they return to rationality and learn from the lessons from the past and trust nothing but the Syrian homeland.

For his part, Minister Arreaza said, “I agree with Minister Muallem that the US conspiracy is targeting both of our countries,” adding that, “The Venezuelan and the Syrian people are resisting the imperialism and the US conspiracies and they will triumph.”

He added that all the nations of the world should learn a lesson from Syria, which is achieving victories over terrorism.

“The US government speaks about a military intervention in Venezuela and it says that all options are on the table, but the question is: Why dialogue isn’t among the options?”  Arreaza.