The Syrian National Coalition has called on the international community not to stay quiet on the issue of the Golan and are concerned about the precedent that it could set. 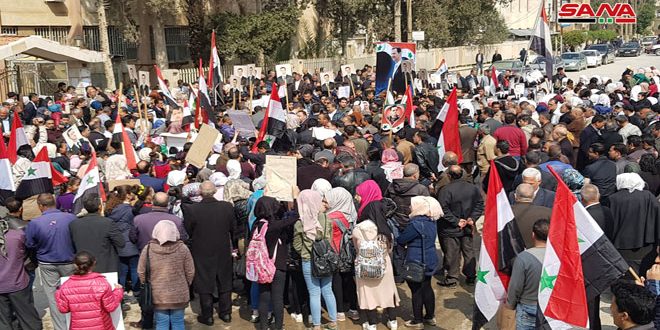 US President Donald Trump’s decision on the occupied Golan has sparked an Arab and international outcry as more statements are issued to condemn the move and warn of the serious repercussions for the region.

On Monday, UN spokesman Stephane Dujarric said that the United Nations Secretary-General Antonio Guterres is “clear that the status of Golan has not changed.”

“The UN’s policy on Golan is reflected in the relevant resolutions of the Security Council and that policy has not changed,” Dujarric added.

President Trump’s move contravenes UN Security Council Resolution 497 affirming the legal status of the Golan as an occupied Syrian territory and rejecting the Israeli occupation’s decision to annex it in 1981. The resolution also considers the decision as null and void.

Moreover, the EU said that its stance on the status of the Golan “has not changed” despite the US move to recognize the Israeli occupation’s sovereignty over the “occupied territory,” the foreign policy chief of the bloc said on Wednesday.

“The position of the European Union as regards the status of the Golan Heights has not changed,” Federica Mogherini said in a declaration on behalf of the EU.

Arab League Secretary-General, Ahmed Aboul Gheit, denounced the announcement by US President Donald Trump, saying that, “if the occupation is a major crime, its legitimization is no less serious.”

Gheit said that the use of force does not shape rights and does not entail advantages and that international law is not made by any one state, whatever its status.

The Syrian National Coalition said that the attempts by US President Donald Trump to grant legitimacy to the Israeli occupation of the Golan violates international law. It warned the international community against, “remaining silent about any allusions to the territorial integrity of Syria.”

“The mere talk by anyone about recognizing the legitimacy of the occupation and the seizure of land by military force constitutes a violation of international law and consolidation of the law of the jungle. Such move also contravenes UN Security Council resolutions,” the Coalition said in a press release issued by the political committee on Friday.

On Monday, a Financial Times’ editorial said that President Trump has, “set a dangerous precedent that risks repercussions far beyond the region,” adding that, “Donald Trump has once again displayed a reckless disregard for international norms.”