Bashar al-Assad has reiterated that the regime will retake all areas, including Idleb and areas currently controlled by the Syrian Democratic Forces writes Al-Araby al-Jadeed. 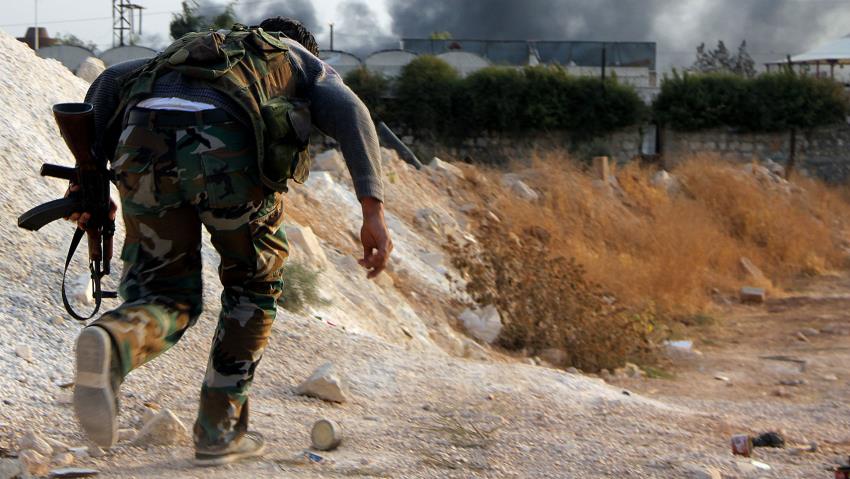 The Syrian regime has unequivocally declared once again that it will retake the rest of the country by any means it deems necessary, including military force. This demonstrates that, despite all its past claims of being willing to abide by ceasefires and negotiate peace with its many opponents, this was always its intention since the very start of the war. It also potentially means that with over one-third of the country still outside of regime control, these areas, too, could descend into bloody conflict, which could prolong the destructive eight-year-old Syrian war even further.

Syrian Defense Minister Ali Abdullah Ayyoub, in a joint press conference with the chiefs of staff of both Iran and Iraq, reiterated the regime’s goal of continuing the war if that’s what’s needed for it to reconquer the entire country.

“The Syrian state will regain full control over all of its geography sooner or later, whether through reconciliation or military force. Idlib won’t be an exception at all,” he declared.

Dubbing the continued US troop presence in the northeast of the country illegal he reaffirmed that: “There won’t be any area of Syrian soil outside the government control.”

Syrian President Bashar al-Assad has stated on multiple occasions in recent years that his aim is to reconquer “every inch” of the country. This February, he repeated this goal using the exact same phraseology.

Such statements demonstrated Assad’s clear disregard of the ceasefires his regime agreed to and pressure from world powers for him to reach a conclusive settlement to bring an end to the bloody conflict. In retrospect, and even at the time, it was clear that Damascus played along with the various Geneva peace negotiations simply in order to buy itself more time.

Last year was a year of successive victories for Assad’s regime. Its forces levelled the opposition bastions of Eastern Ghouta, in Damascus, and Daraa, in the south where the uprising against Assad’s rule began back in March 2011.

The Syrian dictator was able to focus on one battlefield at a time since he had secured ceasefires with his opponents elsewhere under the Russia-sponsored Astana Agreement’s de-escalation zones. This enabled him to avoid getting embroiled on multiple fronts simultaneously, as was the case earlier in the war.

Today, there is only one de-escalation zone left in the conflict. That is in the northwestern province of Idlib, which is currently controlled by the jihadist group, Hayat Tahrir al-Sham (HTS) group.

This month, Russian and Turkish military forces began joint patrols of the demilitarised zone the latter established in the province last September in order to stave off a major regime offensive into Idlib.

In recent weeks Assad, with Russian support, has stepped up airstrikes on Idlib, the most serious and deadly since last fall. Now, it seems, it’s only a matter of time before he launches an assault on Idlib, which many fear could create another humanitarian crisis since at least three million civilians are still in that province.

Idlib, if not handled carefully, could become the most devastating single battle in the Syrian war since the infamous one that transpired in East Aleppo back in 2016.

Turkey completely failed to adequately contain HTS. The jihadists were able to seize dozens of villages in both Idlib and Aleppo in January, becoming the most powerful and undisputed force on the ground in Idlib.

This all happened in spite of the fact that the Turkish Army has 12 observation posts, established as part of the Idlib de-escalation zone, along Idlib’s frontiers and supported and trained a large force of Syrian militiamen, the National Liberation Front (NLF). The NLF promptly reached a ceasefire agreement with HTS following the group’s January offensives which essentially amounted to a capitulation.

These current patrols Turkey is conducting with Russia will not likely reverse these territorial losses to HTS nor forestall a regime offensive indefinitely, especially since Russia is actively participating in the aerial bombardment of Idlib once again.

Then there is the one-third of Syria currently under the control of the Kurdish-led Syrian Democratic Forces (SDF). While that force has largely focused on combating the Islamic State group (IS), Assad is still adamant they disband and the regime retakes full control of the areas they control, which includes most of the major Syrian-Kurdish territories that gained de-facto autonomy for the first time ever, back in 2012.

The SDF has tried to negotiate with the regime on at least two occasions since last summer. These talks never made any real progress. Damascus is opposed to the mere idea of discussing autonomy or any form of decentralisation with Kurdish-led forces.

In the long-term, this probably means that the SDF’s only two real options are to either surrender or try and fight the regime. The SDF, for its part, opposes any “military solution” since they say that “will lead to more losses and destruction and difficulties for the Syrian people”.

“The use of threatening language against the Syrian Democratic Forces, which liberated and protected all of northern and eastern Syria from the terrorist forces, only serves the forces that are working to divide Syria’s unity,”  they said, adding that Ayyoub’s position “reflects the continuation of the sterile racist policies that led Syria to this catastrophic situation”.

Assad was unambiguous about his goals for SDF-controlled areas in Syria back in May 2018 during an uncritical interview with Russia Today. He stated that his regime would first try to negotiate with the SDF, by which he more likely than not meant the terms of the group’s surrender, and if that failed he would resort to military force. He also dismissed the American military presence in those SDF-controlled areas, insisting he would take action there “with the Americans, or without the Americans”.

More recently, in his statements this February, Assad, in a message clearly directed at the SDF, warned against any group in the country counting on American protection.

Given his unwillingness to consider any reasonable compromise or peace settlement Assad’s hell-bent goal to reconquer all of Syria and re-subjugate its population under his rule could see the war drag on into the 2020s.