A number of Arab countries have started to rebuild diplomatic relations with Syria, following their suspension from the Arab League writes Hurriya Press. 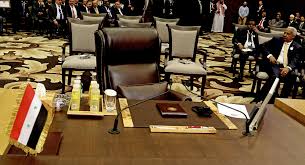 On Wednesday, Egypt’s Foreign Minister Sameh Shoukry announced that his country was not placing conditions on the Assad regime returning to its frozen seat in the Arab League.

Shoukry said that, “Egypt doesn’t have any conditions for Syria (the Assad regime) returning to the Arab League.” He added that, “Cairo and Damascus have strong ties.”

The Egyptian minister added, “In recent years I have called for the crisis to be contained and for Syria and its people to be spared from the scourge of war, destruction and threats related to the operations of terrorist groups in Syria.”

Shoukry previously said in a media statement in January that, “the failure of the regime government to take the necessary steps (not specified) to maintain security and stability and sovereignty and proceed on the political path to get out of the crisis have made the situation as it is.”

The Secretary-General of the Arab League Ahmed Aboul Gheit said in February that he had not observed the consensus that would lead to foreign ministers agreeing to call for the Assad regime to return to the Arab League.

Since the Syrian revolution broke out, Arab countries closed a number of their embassies in Damascus, and downgraded their relations with the Assad regime. But a few have called in recent months for the resumption of relations and to restore the regime’s membership to the Arab League.