The Turkish patrol was welcomed in the Sahel al-Ghab area by residents, who have been subjected to regime bombardments reports Al-Modon. 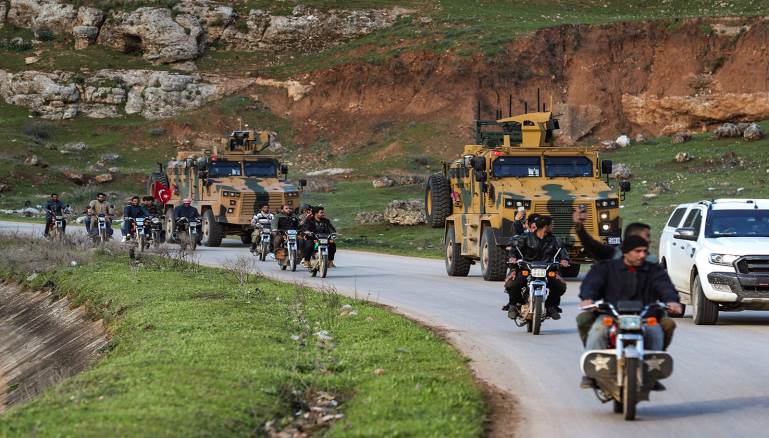 Since Mar. 8, 2019, the Turkish army has been running observation patrols in the demilitarized zone of Idleb and the countrysides of Hama, Aleppo and Lattakia, in accordance with the Sochi agreement signed with Russia in September 2018.

The Turkish army patrols have resumed over the last few days after stopping for more than a week due to a dispute between Faylaq al-Rahman and Hay’at Tahrir al-Sham regarding the right to accompany and secure the patrols.

Al-Modon’s sources said that the Turkish army had deliberately ignored Tahrir al-Sham and limited coordination with Faylaq al-Rahman, which annoyed Tahrir al-Sham and pushed them to take control over Faylaq’s checkpoints and positions in the buffer zone east of Idleb. According to Al-Modon’s sources, some of the points and positions they seized were near Turkish observation points.

Tahrir al-Sham’s pressure succeeded in getting them involved in accompanying the Turkish patrols and its members participating indirectly alongside the Faylaq fighters who are officially undertaking the task, according to Al-Modon sources.

Although four Turkish army patrols are active in the buffer zone, they have not included all areas falling between Turkish observation points in the Idleb environs. The patrols have also not succeeded in stopping artillery and rockets bombardments by the regime’s militias. Over the past two days, the Sahel al-Ghab area in the northwestern Hama countryside has seen a heavy bombardment after the third Turkish army patrolled passed, which included the areas between the observation points in Eshtabraq and Sheer Maghar. The al-Huwayz municipality declared an emergency after more than 300 artillery shells and rockets fell in record time.

The third patrol of the Turkish army was welcomed by residents in the Sahel al-Ghab area and the western Jisr al-Shaghour countryside in Idleb. Residents waved Turkish flags, and a number of them accompanied the Turkish military vehicles on their motorcycles while they patrolled the area. Members of Tahrir al-Sham fired into the air to clear those who gathered and keep them back and there were clashes between residents and fighters in multiple locations.

The Turkish patrol and the way it was welcomed by the residents of the towns and villages in the buffer zone caused controversy among supporters of the Salafi groups. Members of the Heras al-Deen group said that the warm reception of the Turkish patrols was a natural result of the Russian and Turkish plans in Idleb and that, “the heavy bombardment pushes people to attach themselves to the secular apostate army and then pull the rug out from under the mujahideen with the approval and accompaniment of Hay’at Tahrir al-Sham.”