Walid al-Muallem thanked the UN Special Envoy for Syria for his commitment to the political process and for facilitating the inter-Syrian dialogue reports SANA. 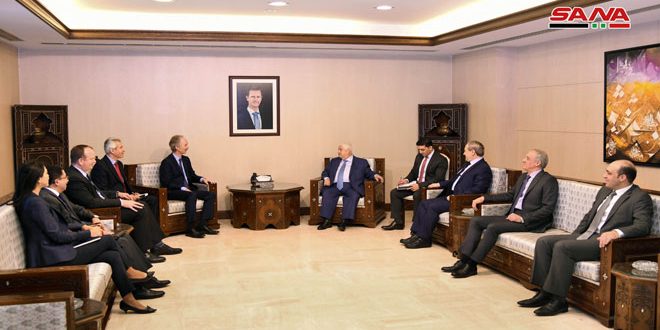 During the meeting, a number of issues related to the political process were discussed, including the committee to discuss the constitution.

Muallem reiterated Syria’s readiness to continue cooperating with Pedersen to make his mission a success, by facilitating the inter-Syrian dialogue to reach a political solution, which serves the interests of Syrians, preserves Syria’s sovereignty, independence and unity and leads to the eradication of terrorism as well as ending the illegal foreign presence in the country.

He stressed that the political process should be conducted by the leadership and owned by Syria, adding that only the Syrian people can determine the future of the country.

Muallem stressed that the constitution and everything related to it is a purely sovereign affair, which is decided on by the Syrian people and without foreign interference, in accordance with international law, the UN Charter and all relevant Security Council resolutions on Syria.

For his part, Pedersen expressed his happiness to return to Damascus in order to continue consulting with the Syrian government and make progress on the political track, affirming that he won’t spare any effort to reach a political solution in accordance with the principles laid out in the UN Charter and the relevant UN Security Council resolutions.

He also affirmed the full commitment of the United Nations to the sovereignty, independence and territorial integrity of Syria.