With its recent visit to Syria, Iran has sent a message to the world, that they will be taking part in the reconstruction of Syria reports SANA. 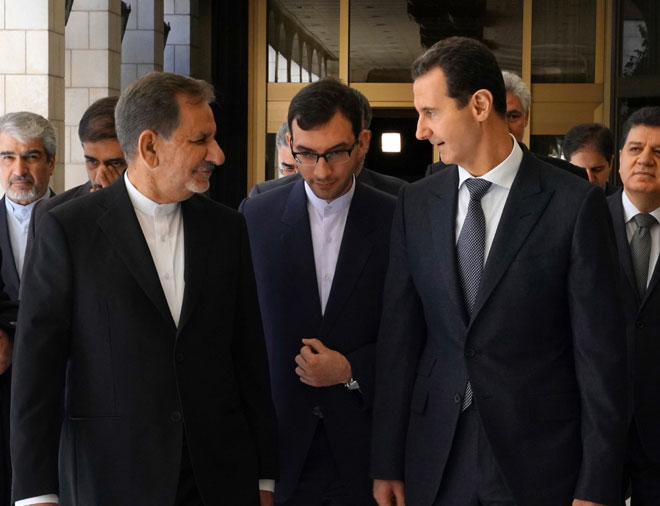 On Tuesday, President Bashar al-Assad received Iran’s first Vice President, Eshaq Jahangiri, and the accompanying delegation in the presence of the Prime Minister and a number of ministers.

Talks dealt with the outcomes of the meetings of the Syrian-Iranian High Joint Committee, which yielded the signature of 11 agreements, including the long-term strategic economic cooperation agreement.

President Assad stressed that these agreements and projects of cooperation are of a strategic dimension and constitute a solid economic basis that will contribute to enhancing the steadfastness of Syria and Iran, in the face of the economic war waged on them by some Western countries.

He affirmed the importance of intensifying joint efforts at this stage to thwart the efforts of those countries that continuously work to weaken the two countries, control their independent decision  making and to break the will of their people, following their failure to achieve this by supporting terrorist groups.

For his part, Jahangiri pointed out that the visit of the Iranian delegation and the meetings of the Joint Committee at this time carry a message to the Syrian people and the international community that, Iran, which has stood by Syria in its war against terrorism, will be included in the reconstruction phase.

He said that Syria was on the frontline of the war on terrorism and that the successes achieved in this area have contributed to preventing terrorism from spreading in other countries, despite the refusal of some Western countries to recognize that.