The protesters decried the Turkish threats to launch an attack in Syrian territory, and called for an end to the presence of any illegitimate foreign presence reports SANA. 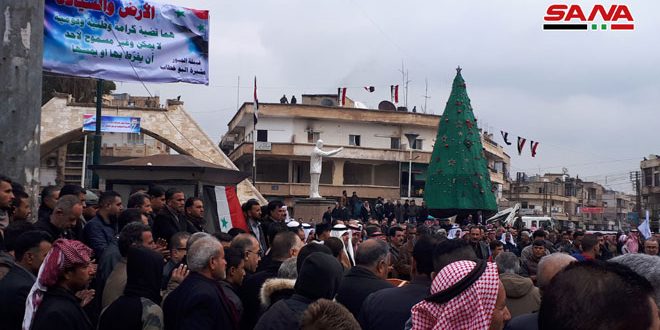 On Thursday, Hassakeh City witnessed a massive popular gathering denouncing Turkish threats to launch an aggression against Syria and rejecting any illegitimate foreign presence in the country.

The gathering was held at the President Square with the participation of elders and dignitaries of the clans and tribes and representatives of different elements in the province.

SANA’s reporter said that participants stood with and supported the Syrian Arab Army, the icon of national sovereignty, in the face of all types and forms of terrorism and in the face of threats by the Turkish regime to launch an aggression in Syria.

They asserted their readiness to sacrifice in order to defend the homeland in the face of any aggression and to preserve the territorial integrity of Syria and the dignity of its people.

Over the past few days, many Syrian provinces have witnessed rallies and massive gatherings in support of the victories achieved by the Syrian Arab Army over terrorism, in addition to holding many protests against threats by the Turkish regime and its direct support for terrorist organizations.

This article was edited by The Syrian Observer. Responsibility for the information and views set out in this article lies entirely with the author.v