The SDC said that it was ready to hand over the border with Turkey and become incorporated in the Syrian army reports Damas Post. 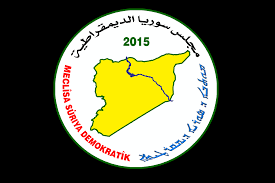 Sources have reported that a secret meeting has been held between representatives of the Syrian government and commanders from the Democratic Union Party (PYD) in Ayn Eissa in recent days.

Dr. Fareed Sadoun, a former academic at Euphrates University, said that, “A meeting was held between a delegation from the state and the PYD in Ayn Eissa. It succeeded in bringing together the viewpoints of the two sides.” He added that, “The meeting was held with the knowledge of the Russians and Iranians.”

Sadoun said on his Facebook page that, “the two sides agreed to continue meetings until an agreement was reached to cooperate and coordinate in the area, following Turkish threats to invade.”

News outlets and activists have said that, “On Sunday evening, a number of cars flying the Syrian flag arrived at the base of the so-called ‘Syrian Democratic Council’ (SDC) in the town of Ayn Eissa in northern Raqqa.”

The co-chair of the SDC, Riad Darar, announced on Friday that the Syrian Democratic Forces (SDF) were ready to hand over the border strip with Turkey to the Syrian Arab Army, saying that communication with the Syrian government over the latest Turkish threats had not yet begun.