President Assad has thanked Jordan for its support and has called for increased partnership in parliamentary and economic fields writes SANA. 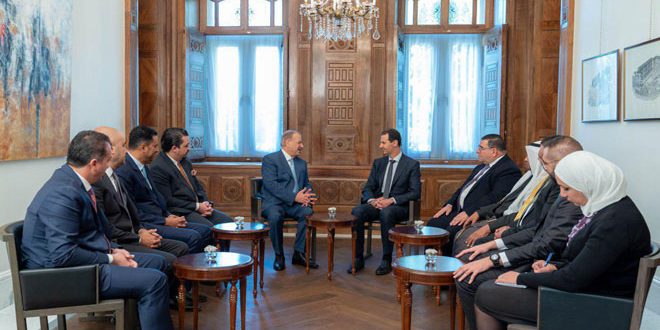 On Monday, President Bashar al-Assad received a Jordanian parliamentary delegation comprised of a number of heads of committees from the Jordanian Parliament and headed by MP Abdul Karim al Doghmi.

Discussions during the meeting dealt with the importance of activating bilateral relations between Syria and Jordan in all fields in a way that serves the interests of the two brotherly peoples.

The members of the delegation affirmed that the pulse of the Jordanian street has always been with the Syrian people as they face the war against terrorism and that Syria is the first line of defense for the entire Arab region and that victory in this war will be a victory for all the Arab countries in the face of Western projects aimed at destabilizing and fragmenting these countries in service of Israel’s security.

They said that the Syrian people have managed to foil external conspiracies through their solidarity with the leadership and army in order to keep Syria the voice of the Arabs and the beating heart of Arabism.

President Assad said that the importance of the parliamentary delegations’ visits stems from the fact that they are the real reflection of popular positions and the compass for the bilateral relations between countries, which must always be driven by the interests of the people and their aspirations.

President Assad referred to the great role of parliamentarians in educating the Arab people about the reality of the battle facing our Arab region, which is not only related to Syria. Rather, the President explained, it is a long battle whose essence is to strike at the belonging of the Arab people, so that all foreign projects become easy to implement.

President Assad affirmed that the adherence of the Syrian people and army to their national sense of belonging has been one of the basic factors which contributed to their steadfastness despite all the attempts that targeted this belonging.

In the same context, Deputy Prime Minister and Foreign and Expatriates Minister Walid al-Muallem met the Jordanian delegation and discussed the deep brotherly relations binding the Syrian–Jordanian people and the desire to enhance them at all levels, especially at the parliamentary level, in addition to developing bilateral cooperation between the two countries to serve the common interests of the two peoples.

The two sides affirmed the importance of re-opening the Nasib Border Crossing between Syria and Jordan due to its positive impact on goods exchange and the movement of people, with the aim of strengthening popular and economic cooperation.

The two sides also discussed the latest political and field developments in Syria and the region which led to changes in regional and international arenas.