The Syrian army has freed from ISIS a number of civilians, including women and children, who had been abducted in Suweida weeks ago 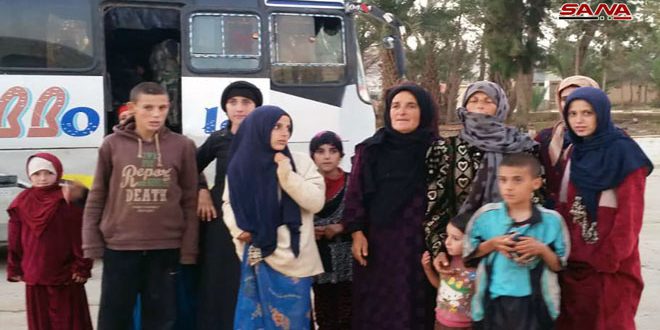 The Syrian Arab army managed, in a valiant and accurate operation, to liberate the civilians abducted weeks ago by the ISIS terrorist organization from the Suweida province, following a fierce battle with an ISIS group in the Humeima area northeast of Palmyra.

The army killed the members of the terrorist group.

On October 20, a batch of women and children who had been abducted from al-Shabki village in Suweida’s eastern countryside were liberated from ISIS.

On July 25, ISIS kidnapped several civilians, most of them women and children, following attacks that the terrorist organization mounted against villages in the province’s eastern and northern countryside and a string of suicide bombings in Suweida city that killed several civilians.

Speaking to SANA, Sheikh Akl Hammoud Yahya al-Hinnawi said that liberating the abductees is a victory for the Syrian people, thanks to the heroism of the Syrian Arab Army’s personnel who have been fighting terrorists since the early hours of the kidnapping process and managed to liberate the abductees.