In its latest report, The Syrian Network for Human rights has said that over 222,000 civilians have died since March 2011, with Assad forces being responsible for almost 90 percent of them. 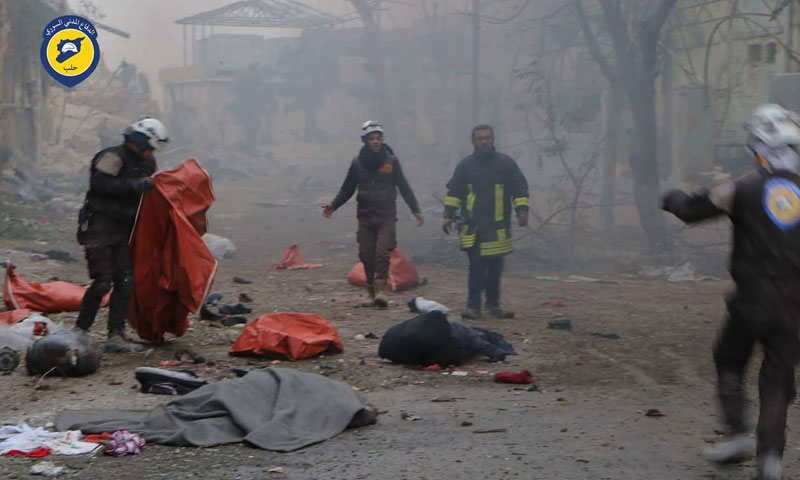 The number of civilian killed in Syria since the start of the uprising to this September has exceeded 222,000.

The report said that the number of victims resulting from operations by Assad’s forces and its militias were 198,152, or 89.21 percent.

The number of victims of Russian operations reached 6,239, or 2.81 percent.

There were 4,112 civilians killed by opposition groups, or 2 percent, while the number killed by the international coalition forces was 2,830, or 1.27 percent.

The Network published a map showing the distribution of the civilian deaths caused by international coalition forces from Sep. 23, 2017, to Sep. 23, 2018, with the highest being in Deir ez-Zor with 196 deaths, and then Raqqa with 88 deaths, Aleppo with 53 deaths, Idleb with eight, and Homs with one death.

The US-led coalition intervened in Syria with the aim of eliminating the Islamic State in September 2014.

The Network documented that Assad’s forces carried out at least 50 massacres of a “sectarian hue” from March 2013 to February 2018.

According to the report, the massacres were distributed across locations including Homs, which witnessed 22 massacres, where 1,040 people were killed, with 10 armed opposition fighters and 1,030 civilians, including 209 children and 200 women.

According to the Network, Assad’s forces have carried out eight massacres in which 416 people were killed including five fighters and 411 civilians, including 63 children and 34 women.

It also killed 197 civilians in eight massacres in Hama city, including 21 children and 20 women.

It killed 686 people in five massacres in the Damascus countryside, including 55 opposition fighters.